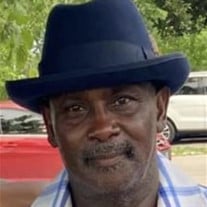 Remembering the life of Willie Jones, lovingly known to his family and friends as Cadillac. Willie was born on September 9, 1958 in Elizabethtown, NC to the late Willie Jones Sr. (Lonnie Bell Batten) and the late Margaret McNeil Thompson.... View Obituary & Service Information

The family of Willie Jones created this Life Tributes page to make it easy to share your memories.

Remembering the life of Willie Jones, lovingly known to his family...

Send flowers to the Jones family.