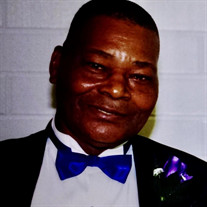 On August 6, 2020 Willie was called home to be with The Father. He was born on August 16, 1932 to Dennie and Fannie Clemmons in Panama City, Florida. He started working for Butler’s Farm at the age of 13. He completed 5th grade but knew so much for his age that he wanted to work. He worked at Butler’s Farms for 40 years (1988). He met and married Verdell Williams at the age of 21 on February 16, 1953 and moved to 4 Point Camp where they lived. In 1959 they moved to Pompano Beach, Florida. Butler’s Farm changed to new ownership (Mecca Farms) where he worked until 1993; he then moved on to Coral Ridge Properties until he retired in 1995. Married for 47 years the pair had 16 children. They also raised 4 grandhildren and a nephew. He became a widow March 15, 2000. He was a true man of God that kept Christ before his family, always seen reading his bible and sharing biblical knowledge to anyone wheth- er they asked or not. He loved to build and remodel houses, work on cars, work around the yard, and did it with a smile while serving others. His priorities was serving the Lord and providing for his family. He embodied the nine fruits of the spirit: Love, Joy, Peace, Patience, Kind- ness, Goodness, Faithfulness, Gentleness, and Self Control. A few of his favorite scriptures were: Ephesians 4:26, James 3:5 and Mathew 5:33-37. He leaves to Cherish his memories his children: Beulah (Curtis- deceased), Iris, Loistein (Arthur), Willie Jr., Leon, June (James- deceased), Sandra, Beverly, Carletha (Earl), Derrick (Nicole), Hope, Thaddeus (Cynthia) and Tosha; Nephew they raised: Gregory; Grandchildren they raised: Tracy (Norman-deceased), Karen (Timothy), and Simon (Pearlise) and Johnny. His Sisters: Leatha, Barbara (James), Ethel Mae (George- deceased), Shirley (John) and Evon (John); His Brother: Leroy (Naomi). A Host of relatives: 47 Grandchildren, 71 Great grandchildren, 13 Great-great Grandchildren; aunts, uncles, nieces, nephews, cousins, and friends. Willie is preceded in death by his Loving Wife: Verdell; his Son: An- thony Kelvin; his daughter: Baby Girl Clemmons; Brothers: John, and Eugene; his sisters: Mattie Lee, Emma, and Odessa.

On August 6, 2020 Willie was called home to be with The Father. He was born on August 16, 1932 to Dennie and Fannie Clemmons in Panama City, Florida. He started working for Butler&#8217;s Farm at the age of 13. He completed 5th grade but knew... View Obituary & Service Information

The family of Willie C. Clemmons Sr. created this Life Tributes page to make it easy to share your memories.

Send flowers to the Clemmons family.