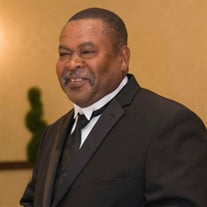 Obituary August 14, 1951 - March 20, 2021 Willie Mack Bass, Jr., affectionately known as Booly to family and close friends, was born to the late Willie Mack Bass, Sr. and Earnestine (Coney) Bass in Eastman, Georgia on August 14, 1951. Shortly after birth, his family relocated to Pompano Beach, FL. He attended and graduated from Pompano Beach High School. After graduation he attended technical college and became certified in heavy equipment operations. Willie started a career in land development with Westinghouse Communities, where he worked for 38 years. Willie married the love of his life, Veronica (Beasley) on April 23, 1977 in Pompano Beach. They moved to Fort Lauderdale and remained married for 43 years. From their union they birth five children: Erica Bass, Lauren Bass (deceased), Pamela Joe (Ernest Joe, III), William Bass, and Rachel Bass. Lauren Bass died at birth in March of 1982. Throughout his life he enjoyed his wife’s cooking, spending time outdoors, and being around his family. Willie was a member of First Baptist Church Piney Grove until the Lord called this great man, husband, and father home on the evening of March 20, 2021. Those left to cherish his memories: his loving and devoted wife, Veronica A. Bass, three daughters, one son, and four grandchildren, Eden, Ella, Emani, and Ezekiel Joe. His sister-in-law who assisted in his care Diane Walls, who was like a daughter to him. His siblings whom he loved: Veta Johnson, Monica Smith (Ray), Vincent Bass (Dorothy), Ronnie Bass, and Jacqueline Bass. Along with a host of nieces, nephews, cousins, and friend.

The family of Willie Mack Bass Jr. created this Life Tributes page to make it easy to share your memories.

Send flowers to the Bass family.