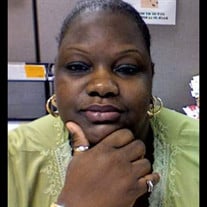 Wanda Lavette Henry On September 1, 1965, a beautiful bouncing baby girl was born to the parents of Barbara Jackson Davis and the late Henry Bentley Sr. Wanda was born in the city of Miami and was immediately united with her family in Pompano Beach where she received the bulk of her rearing. She was a joyous addition to have in the family. Her doting grandparents, the late Mr. and Mrs. James Lucious Boyd Sr. relished their first grandchild’s presence in the home. Wanda transitioned from this side of Jordan on Friday, October 23, 2020 to her final home in heaven where she is reunited with a much admired and loving woman whom she referred to as “Grandmother.” Oh how she loved her “Grandmother.” Wanda received her former education in the Broward County Public School system where she attended the following schools: Nova Blanche Forman Elementary, Nova Middle and Nova High School graduating in the class of 1983. After graduation, she began her career with Broward County Public Schools where she dedicated 35 years of employment working in various capacities throughout the system. Due to her illness, Wanda’s employment ended on October 2, 2020, in retirement. Wanda received Christ as Lord and Savior at a very young age at St. John African Methodist Episcopal Church where she served in the Young People’s Department, sang in the choir and served as a secretary where she assumed the role after her grandmother’s passing. Wanda was very committed to the call of ensuring that programs were prepared in a timely manner for Sunday services for both her current and former Pastors. Wanda was married for 22 years to Brent Henry Sr., and through that union had four amazing children who will forever miss their mom. She leaves to mourn three daughters, Breanna Lavette Henry of Jacksonville, FL, Brene’ Charnette and Bremari Janay Henry and one doting and caring son, Brent Corwin Henry Jr. all of Fort Lauderdale, FL. She also leaves behind a loving mother, Barbara Jackson Davis of Jacksonville, FL; two sisters, Cassandra L. Walker of Lauderhill, FL, Charlotte Lockett (Kent) of Jacksonville, FL; one brother, Henry Bentley Jr. (Kachelle) of Cincinnati, OH; three nephews, Jovan Maurice and JonTavis Marquis Walker and Tyler Bentley; nieces, Chakia LaQuay Walker and Daria Bentley; aunts, Delois Wilson (Marvyn), Cynthia Lee and Quanya Harris (Charles); uncles, Victor and Zachary Boyd (Pam); an endearing cousin, Lewis Watley Jr. (Beverly); and a host of nieces, nephews, cousins and dear friends whom she loved and cherished dearly. Wanda loved greatly and will be truly missed by many.

Wanda Lavette Henry On September 1, 1965, a beautiful bouncing baby girl was born to the parents of Barbara Jackson Davis and the late Henry Bentley Sr. Wanda was born in the city of Miami and was immediately united with her family in Pompano... View Obituary & Service Information

The family of Wanda Jackson Henry created this Life Tributes page to make it easy to share your memories.

Send flowers to the Henry family.