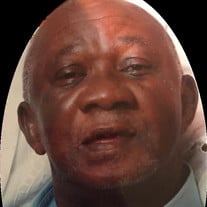 Vilius Duverneau was called home to be with the Lord on Friday, February 8, 2019 at the age of 81. Born on September 15, 1937 in Limbé, Haiti, Vilius Duverneau was the second child of the couple formed by Jerome and Marguerite Duverneau. He attended “ Ecole Nationale de Charbeaux” in Limbé for the most part of his childhood and teenage years. On March 15, 1973 Vilius married the queen of his heart, Therese Duverneau and wasted no time to give birth to three beautiful children: Emmanuel Duverneau, James Duverneau (deceased) and Lovelyne Duverneau. Vilius was a great servant of God, a loving husband and father; he worked tirelessly as a farmer and tailor to support his family and always wanted the best for his children. On December 14, 2007, Vilius and his wife left Haiti to be reunited with their son, Emmanuel Duverneau, in Margate Florida. This move allowed him to meet and enjoyed the presence of his first daughter-in- law Rachel Duverneau and his three grandchildren Keren, Emmanuel Junior and Liz Duverneau. Upon his arrival, he became a member of the First Haitian Baptist Church of Pompano. Vilius had suffered from multiple chronic illnesses for many years. Although his health had been declined in recent years, he was strong and never got discouraged. He decided to be joyful about having had a full life, rather than complaining about his fate. Amazingly, this outlook worked for him. He was always so kind and pleasant with his grandchildren, nephews, nieces and everyone who got to know him. Vilius is survived by his wife Therese Duverneau, his son Emmanuel Duverneau, his daughter Lovelyne Duverneau, his daughter-in-law Rachel Duverneau, his three grandchildren Keren Duverneau, Emmanuel Duverneau Junior and Liz Duverneau, his brothers Innocent Duvernot, Anebert Duvernot, his sisters Mrs. Eliassin Thoby, Mrs. Gaby Vixamar , his sister in-law Amina Laurent Duvernot and numerous nephews, nieces, cousins and all of his beloved friends.

Vilius Duverneau was called home to be with the Lord on Friday, February 8, 2019 at the age of 81. Born on September 15, 1937 in Limbe&#769;, Haiti, Vilius Duverneau was the second child of the couple formed by Jerome and Marguerite Duverneau.... View Obituary & Service Information

The family of Vilius Duverneau created this Life Tributes page to make it easy to share your memories.

Vilius Duverneau was called home to be with the Lord on Friday,...

Send flowers to the Duverneau family.