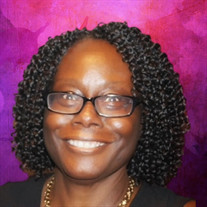 Sherry Lyndette Harris of Pompano Beach, Florida peacefully passed away Wednesday, October 20, 2021. Sherry was born to the union of the late Goodman and European Harris on March 22, 1964, in Pompano Beach, Florida. After the passing of her mother when Sherry was seven years old, she moved to Tallahassee. She was raised by her sister and brother-in-law Robert and Juanita Harris Flakes until she reached adulthood. Sherry graduated from Florida High School in Tallahassee, FL, in 1982. She was an avid reader and loved to learn. After high school, Sherry returned to Pompano Beach, Fl, to be close to her dad, brothers, and many other relatives. Sherry furthered her education by graduating from Dental Assistant School. She worked as a skilled Dental Assistant for FL Dental Spa under the leadership of Dr. Gregory Gertsen. Sherry was raised in the church and accepted Christ at a young age. She was an active member of Fountain Chapel A.M.E Church in Tallahassee, where she was in the youth choir, Sunday School Department, and Young People’s Division (YPD). As an adult, Sherry became a member of Hopewell Baptist Church of Pompano Beach, Fl. To know her was to love her. Those left behind to cherish her memory: Sister: Juanita Harris Flakes (Robert) Brothers: Roosevelt Harris (Velma), Alvin Harris (Rosalind), Henry Harris, preceded her in death (Patricia) Aunts: Mary Morris (Willie), Helen Sanders, Ellen Judson, Maebell Walker (Donald), Betty Atkins Sherry also leaves a host of nieces, nephews, cousins, and friends to cherish her memory forever.

The family of Sherry Harris created this Life Tributes page to make it easy to share your memories.

Send flowers to the Harris family.