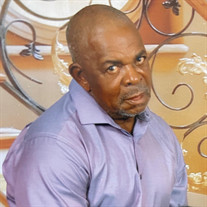 LIFE REFLECTIONS FOR SABLE SONCOEUR Sunrise: January 8, 1953 Sunset: October 24, 2021 Sable was born on January 8 1953 in north west mole saint nicolas haiti. At the age of 26 he moved to Pompano Beach, Florida where he became a lifetime resident. He is the kind of man that would give you the shirt off his back and the food out of his mouth. He was a man that loved being around his family and making sure his kids were raised right. He leave to cherish his memories: His mother Macelia Destin ; His wife Nosimene ; His sons Brandon,Sam,Junior, Roody,Nicholas,Jeff ; His brother's Saul , Dieusel, Ichardson,Wilson ; His sisters Icelia, Bernadette, Christina, Monique, Samilia ; His nephew Jeanry,Wender,Willow,Renald Gary ; His Nieces Simone,Dana,Christmene,Poulna,Emmett ; His uncles Pierre, Salesian , Temen

The family of Sable Soncoeur created this Life Tributes page to make it easy to share your memories.

Send flowers to the Soncoeur family.