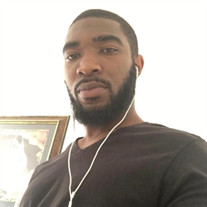 Rudolph James Lee Jr, affectionately called by his family and friends (RJ), was born on May 8, 1988 in which his mother calls a special Mother’s Day gift, in Fort Lauderdale, Fl to Rachel Maxie-Lee and Rudolph James Lee. On Saturday, March 5, 2022, at the tender age of 33 years young, Rudolph’s time on this earth was cut short. His Charm, his smile, and his giving heart will truly be missed. Growing up in Fort Lauderdale and having his two big brothers, Rudolph wanted to stand out for himself! He’s always shown that he was NOT going to be treated like the baby brother he was. So, from the very start, he stood out on his own, demanding that his bigger brothers respected him and let him make his own way. And as head strong and stubborn as he was, he was still such a joy to be around, a fine charming fellow indeed. Rudolph developed into a handsome young man, winning the ladies over with his witty outgoing personality. He was well liked in his community, his friends and family stated that when he walked into a room, he would light the place up. That wit and charm lead him to meet Patricia. The young lady that birthed the (life) of Rudolph, giving him the one thing in this world that mattered most to him, his son Kyng! He was so proud and absolutely loved being a father and a very protective family man and in the eyes of his loved ones, he was the very best! Rudolph leaves behind his four-year-old son Kahleil “Kyng” Lee, and the mother of his son and girlfriend Patricia McGriff. He was survived by his Mother- Rachel Maxie-Lee of Montgomery, Al, and his Father Rudolph Lee of Fort Lauderdale, Fl, his Grandmother- Mildred Lee. Rudolph was preceded by his Grandmother-Father Serito & Lawrence Maxie (deceased). He is survived by his two brothers, M.L Billion of Las Vegas, NV, Stephon Billion of Fort Lauderdale, Fl, and his sister Ms. Tina Lee of Orlando, Fl. Rudolph leaves behind to cherish his memory, aunts and uncles, nieces and nephews, a grandniece, a grandnephew, and a host of other family members and friends, all of whom love him dearly. Officiating Service: Saturday March 19, 2022 12:00pm – 1:30pm L.C. Poitier Funeral Home 317 NW 6th St. Pompano Beach, Fl 33060 FATHER: I LOVE YOU SON, FOREVER IN MY MEMORIES MOTHER: MY SON: I closed my eyes for but a moment and suddenly a man stood where my boy used to be. I may not be able to carry you now in my arms, but I will always carry you in my heart. You have given me so many reasons to be proud of the man you have become, But the proudest moment for me is telling others that you are MY SON. I Love You Now and Forever. But Not Forgotten: I think, no matter where you stray, That I shall go with you a way. Though you may wander sweeter lands, You will not soon forget my hands, Nor yet the way I held my head, Nor all the tremulous things I said. You still will see me, small and bright And smiling, in the secret night, And feel my arms about you when The day comes fluttering back again. I think, no matter where you be, You'll hold me in your memory And keep my image, there without me, By telling later loves about me.

Rudolph James Lee Jr, affectionately called by his family and friends (RJ), was born on May 8, 1988 in which his mother calls a special Mother&#8217;s Day gift, in Fort Lauderdale, Fl to Rachel Maxie-Lee and Rudolph James Lee. On Saturday, March... View Obituary & Service Information

The family of Rudolph James Lee Jr created this Life Tributes page to make it easy to share your memories.

Rudolph James Lee Jr, affectionately called by his family and...

Send flowers to the Lee family.