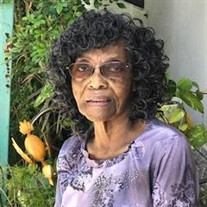 The Life of a Virtuous Woman Who can find a virtuous Woman? for her price is far above rubies. Many daughters have done virtuously, but thou excellest them all. Favour is deceitful, and beauty is vain: but a woman that feareth the Lord, she shall be praised. Proverbs 31:10,29-30 Mother Ruby Lee Sweat was born on July 20th, 1935 in Millen, Georgia to Reedy Crumidy and Matherene Holmes. On Saturday, May 30th, 2020, her suffering and pain was brought to an end. Her Lord called her home to be with Him forever more. Ruby was raised up on a farm with her sisters, Lue Ellen and Mandy; and Curtis, her brother. Her parents were sharecroppers and she worked along side them in the cotton fields. She obtained her education from the Jenkins County School System in Georgia. While attending school she met Jessie Lee Sweat, who she later married. They lived in St. Petersburg, Florida for a few years and then made South Florida their permanent residence. Ruby contributed to her household in various ways. She prepared meals for her family everyday. She worked different jobs outside the home. She would often make clothes for herself and her children. Others observed her skill as a seamstress, and would pay her to alter their clothing as well. Whatever it was she did, she did it with excellence. She joined Antioch Missionary Baptist Church under the leadership of the late Reverend J. L. Latham and has been an active member until her health began to decline. She was a member of the Senior Choir and presided as president over the choir for a few years. She later accepted the honor of becoming one of the Church Mothers. Ruby loved cooking Sunday dinners for her family. She seemed to enjoy even more watching everyone eat the food that she had prepared. She loved playing with babies and little kids. She loved watching Animal Planet and especially watching Meerkat Manor with her grandson, Rashawn. She was preceded in death by: her parents, Reedy Crumidy and Matherene Holmes; her 2 sisters, Mandy Coleman and Lue Ellen Clark; her brother Curtis Williams; her husband, Jessie Lee Sweat; and her daughter, Jessie Mae Benjamin. She leaves to cherish fond memories: three children, Lureen Samuel (Melvin), Ronald Sweat (Merry Jo), and Valarie Raysor (Rafes); six grandchildren, Minister Jeffrey Dilliard (Candace), Dr. Mone’t Ducksworth (Julius), Brian Samuel (Chantani), Kyra Samuel, Rashawn Raysor, and Audrene Raynor; two great grandchildren, Donovan Ducksworth and Logan Ducksworth; two godchildren, Timothy McCarthy Jr., LaDarious Smith Jr., and Jazmine Watkins; one special niece, Ruby Peavy; and two honorary children, Wilfred Gary Thompson and Charlotte Jackson. She was loved by many and shall be dearly missed and fondly remembered.

The Life of a Virtuous Woman Who can find a virtuous Woman? for her price is far above rubies. Many daughters have done virtuously, but thou excellest them all. Favour is deceitful, and beauty is vain: but a woman that feareth the Lord, she... View Obituary & Service Information

The family of Ruby Lee Sweat created this Life Tributes page to make it easy to share your memories.

Send flowers to the Sweat family.