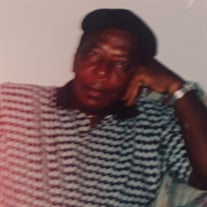 Roy Lee Williams, Sr. was born December 1, 1947 in Gadsden, Alabama. He was the 4th of 6 Children. Born to his Father, Roy Williams, & Mother, Velma Lee Hunter Williams, Roy was a sickly child. Because of his frequent illnesses & encouragement of his grandmother, Etta Kerley, he developed a strong faith and respect for God as a protector. He was asked by his mother to help support the family in the fields, so he ended his formal education at 4th grade, after being double promoted for his advanced skills in math. The family relocated to Lakeland, FL early in life. Before the age of 15 both his parents had crossed over from this life. Roy would often tell about how he had been employed since the age of 14. He worked many jobs throughout his life and acquired an impressive ability to repair things. In the 70s he worked as an employee at Kraft Foods. He also drove tractor trailer trucks for many years and could pinpoint the engines power based on the sound alone. He relocated to Broward County, FL during the latter part of the 1970s. He married Patricia Smith in 1976, they shared many years of love. On March 4, 1982 he was hired as a maintenance worker & grounds keeper for The Meadows of Crystal Lakes. He worked there for 27 years until he suffered a massive heart attack in 2009. He believed that God had kept him here through that time as he often recalled going to the hospital on a Sunday, just to learn that he had suffered a heart attack two days prior. The paramedic, Angel, told him that she would have him at the next hospital in 10 minutes, and his reply, “Well, while you are flying, I will be praying.” When he arrived at the Heart facility, Angel gave him over to the attending nurse. She said, “Hello Mr. Williams, I’m Faith and I will take good care of you.” That was confirmation to him that the protector that he had known those many years ago was by his side yet again. In retirement he continued to count his blessings and thank God for each added days he was given. On January 16, 2020 the sun set on his life. Roy will be remembered as a charismatic, hard-working, gentleman who could get along with any type of person. He had a love for collecting things and enjoyed listening to traditional quartet style gospel music. Sarcastic and witty, he loved to tell jokes and encourage others without judgement. He was loved by many and was known to go out of his way to help a friend and look out for those in need. Roy leaves behind to cherish his memories and celebrate his life, his 4 children: Roy Lee Williams Jr. (Stephanie) of Jacksonville, Florida, Anthony Ware of Lakeland, Florida, Erica Younger (Jerrell) of Brooksville, Florida, Felicia Frazier (Andrew) of Coral Springs, Florida; two brothers: James Earl Watts of Ashland, Alabama, Rufus Williamson of Lakeland, Florida. He also leaves behind 13 grandchildren, 1 great grandchild and a host of nephews, nieces, godchildren, step children, relatives, and friends

Roy Lee Williams, Sr. was born December 1, 1947 in Gadsden, Alabama. He was the 4th of 6 Children. Born to his Father, Roy Williams, & Mother, Velma Lee Hunter Williams, Roy was a sickly child. Because of his frequent illnesses & encouragement... View Obituary & Service Information

The family of Roy Williams created this Life Tributes page to make it easy to share your memories.

Send flowers to the Williams family.