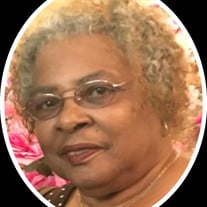 On March 27, 2021, the Almighty Heavenly Father said, “Your work here on earth is done.” Our beloved sister, Rose Lee Bentley-Chase entered into her place of eternal rest; she was called to adorn His kingdom. While our hearts are heavy, we are comforted in the knowledge that she accepted Christ as her Savior, and is now at peace. Rose Bentley-Chase was born on December 17, 1940 in Port Gibson, Mississippi. She was the oldest of ten children born of the union between the late Clara Beatrice and Willie Bentley. In 1943, Rose relocated to Greenville, Mississippi with her parents and in 1958, she wedded Willie Chase. Rose, affectionately known as “Rosa Lee,” was well known for her tenacity and redeeming spirt; she overcame countless obstacles in her quest to create a better life for herself and set an example for family members. Born in the aftermath of the Great Depression and mounting race relations, she was not afforded the opportunity to pursue an education through formal channels. Instead, she capitalized on the prospects in the agriculture industry, which provided a chance for financial stability and experience-based learning. In 1968, they relocated to South Florida. She quickly secured employment in environmental services and hospitality. Ever ambitious, she worked her way through a rigorous process to become a Certified Nursing Assistant and private duty nurse. Rosa Lee took great pride in a profession that aligned with her purpose-caring for marginalized populations. She earned countless accolades for her loyalty and dedication to the service of others. In 2011, she retired, with distinction, from Avondale Manor Retirement Home. As the Matriarch of the family, Rosa Lee truly valued the responsibility and privilege of bestowing wisdom and passing on traditions to the next generations. She found immense pleasure in sharing her favorite pastimes like: music, cooking, fishing, and commemorating milestones/holidays/special occasions. Her home was not limited to family; it was also refuge to many in the community. She is preceded in death by her husband, Willie Chase; parents Willie and Clara Bentley; and Brother, Robert Bentley. Rosa Lee is survived by five children: Larry Chase, Dorothy Robinson (Walter), Vivian Jennings, Brenda Burgess, and Trishuna Brown (Chadwick). 15 grandchildren (two proceeding her in transition), 19 great- grandchildren, and one great-great grandson. Siblings: Mary Bentley, Margaret Bentley, Diane Gillard (Paul), Joann Orinvil, Willie Mae Harris, Thelma Bentley, Richard Bentley (Irma), and Thomas Bentley. Rosa Lee was a faithful member of Mount Calvary Missionary Baptist Church, where she found much joy in worship and fellowship, until her health conditions became debilitating. She has a host of cousins, nieces, nephews, family, and friends to honor the imprint she imparted on their lives. Rosa Lee’s intangible gifts and lessons live on through those who knew her.

On March 27, 2021, the Almighty Heavenly Father said, &#8220;Your work here on earth is done.&#8221; Our beloved sister, Rose Lee Bentley-Chase entered into her place of eternal rest; she was called to adorn His kingdom. While our hearts are... View Obituary & Service Information

The family of Rose Lee Chase created this Life Tributes page to make it easy to share your memories.

Send flowers to the Chase family.