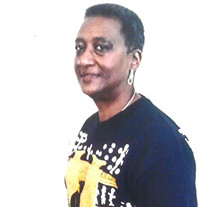 Rosalyn Regina Taylor was born on November 16, 1946 in Brooklyn, New York at the Brooklyn Navy Yard to the late Mamie and Robert Crosson. She was the oldest of six children. In August 1971, Rosalyn married the love of her life, Kenneth Vincent Taylor. After a two year battle with pancreatic cancer, Rosalyn’s body was tired of fighting and she departed this earthly life on February 21, 2018. During her illness, Kenny was Rosalyn’s chief caretaker, taking her to every doctor appointment, every therapy appointment, never leaving her side. Rosalyn, affectionately known as “Rozzie” completed her education through the New York City Public School System graduating from Franklin K. Lane High School. Rosalyn also attended Pace University (NYC Campus), The New School (Greenwich Village Campus) and received a degree in Theology from Life Christian University in December, 2010. Rosalyn accepted Christ at an early age but rededicated herself to Christ in 2005. Rosalyn was a woman who spoke softly and carefully, rarely raising her voice. She was very honest and direct with her comments, trying to encourage and empower others. Her family and so many others have benefitted from her good judgment and wise counsel. In addition to touching people with her wisdom and kindness, Rosalyn’s personal appearance never went unnoticed. She was a most impeccable dresser and always presented herself with style and grace. During her professional career, Rosalyn worked for Time Magazine and retired after twenty years at Sports Illustrated as a Financial Analyst. In 1998, when she relocated to Florida, she worked at WABC in Ft. Myers, Florida as an Advertising Sales Representative as well as several other part-time positions that kept her busy before “officially” retiring. Rosalyn visited many churches while living in Florida but fell in love with and joined Mount Hermon Ministries in Fort Meyers, Florida where her Spiritual Leader was Reverend Dr. William Glover and Hopewell Missionary Baptist Church in Pompano Beach, Florida; where her pastor, Rev. Dr. Robert C. Stanley was her Spiritual Leader. Rosalyn was a faithful member involved in several ministries up until her death. Leaving to Cherish Rosalyn’s Memories: Her loving husband of forty six years, Kenneth Vincent Taylor; daughter, Kenneeda G. Taylor-Sidberry; son-in-law, Robert Sidberry; Grandchildren, Robert K. Sidberry and Monique Sidberry; two brothers, Luther Crosson and Robert Crosson aka MelKin; two sisters, Valerie Donald and Stacey Crosson; one sister-in-law, Annette Crosson; goddaughter Christal Williams and a host of nieces, nephews, cousins, friends as well as her church family at Hopewell Missionary Baptist Church. Her brother, Michael Crosson preceded Rosalyn in death just one month ago. Also leaving to cherish Rosalyn’s memory is her beloved dog, Minnie (MinniePoo). For those that knew Rosalyn, you knew that Rosalyn LOVED HER DOGS!!! Rosalyn always used to say “You can’t change people----People are who they are”. Rosalyn is now reunited in Heaven with her parents, beloved grandmother (Irene Daly), brother and best friend, Sandra Bowman who preceded Rosalyn in death in May 2017.

Rosalyn Regina Taylor was born on November 16, 1946 in Brooklyn, New York at the Brooklyn Navy Yard to the late Mamie and Robert Crosson. She was the oldest of six children. In August 1971, Rosalyn married the love of her life, Kenneth... View Obituary & Service Information

The family of Rosalyn Regina Taylor created this Life Tributes page to make it easy to share your memories.

Send flowers to the Taylor family.