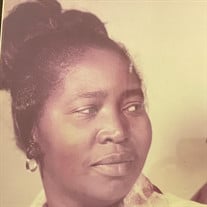 Our beloved Rosa Lee Jackson passed away on Monday, July 26th 2021. She was loved and cherished by her late husband Frank Lee Jackson where their affection for each other continued to grow in their home in Deerfield which she strategically adorned with grace and beauty. They were united in holy matrimony August 27, 1965; and, only his death parted them October 4, 2001. Rose was born January 3, 1937, to Lonnie Bell and Carrie Belle Batten in Deerfield Beach, Fl, where she attended school and spent most of her life; she was truly a Floridian, although she and Frank lived a few years in Ohio. Rose’s primary occupation was as a Domestic Engineer; every home in which worked, she was embraced as part of the family. Yes, she was well known and loved throughout her community and beyond. The apple of her eye was Courtney Osborne, who she raised from birth and gave him unconditional love, yet, he preceded her in death. She also, along with her mother and father, helped in the raising and nurturing of Willie Jones who we all know as Cadillac, primarily during his late teens into adulthood. This was her life’s story; Aunt Rose never had biological children, yet she embraced many children and cared for them and each of us as her own. Her motherly affection extended beyond her nieces and nephews, but children in Florida and beyond. She had three godchildren, the late Derrick Gay, who spoke fondly of; and, listened to hear his voice as he sang, “When the Gates Swing Open”; Lynette Turner-Dorsey and Tyrone Stubbs. Yes, Rose was a Giver. Her middle name was Lee but could have been Generosity. She was known and appreciated by many as she gave of her time, her talents and her resources. There was no distance in her love for family and friends. She cared for her mother until her passing in 1994. She was at the side of her husband who she affectionately called Sonny until he went home. Countless trips north to south and east to west to visit in all Seasons. In the Spring of life, she came to see the family newborns and watch them grow with joy and admiration; in the Summer of life when the sun was shining bright and everyone was full of joy and laughter, she was there. Knowing Fall would come and the Family Tree would be shakened like the leaves. Lovedonesbegantofallonebyone;nevertheless,ourprecious Rose would be there. She would console and dry the tears from our eyes, because distance and time meant nothing to her as her love was endearing for all of us and those who went before. Now, winter has come and a chill is in the air that envelopes us today. She will no longer be able to call us by her pet names and say witty things. Yes, we’ve experienced a heavy snowfall. Each snowflake is unique, not one of them is the same, nor was our Rose. She was a Designer’s Original, and trulyoneofakind. Nevertheless,herwarmth,smileandheartylaughter will always be remembered. her son Thomas Osborne and wife Nora and their beloved grandchildren. Loved ones who preceded her in death were her beloved husband Frank Lee Jackson; their sons, Courtney and Carnell. Rosa’s mother and father Carrie and Lonnie Batten; brothers and sisters; Lonnie Batten, Jr., Viola Reckley, Minnie Anderson, James Batten and Louise Fleming. Rosa Lee leaves us with such fond memories; first, her son Thomas Osborne and wife Nora and grandchildren; her daughter-in-law Marilyn McGee and deceased husband Carnell and their children and grandchildren; her beloved brother Henry Louis Batten of Pompano Beach; and, sister Deloris McKeever; along with a host of nieces, nephews and cousins. Rosa had an infectious personality, and, as result, she had special friends toonumeroustoname. However,BonitaLourdoneMasonofDeerfield Beach, she affectionately called Ladone who remained by her side even in Death; and, for that, we say, thank you. Most importantly, let us rejoice in the fact that, at the end, she gave her life to Christ; and, Jesus became her Lord and Savior

Our beloved Rosa Lee Jackson passed away on Monday, July 26th 2021. She was loved and cherished by her late husband Frank Lee Jackson where their affection for each other continued to grow in their home in Deerfield which she strategically adorned... View Obituary & Service Information

The family of Rosa Lee Jackson created this Life Tributes page to make it easy to share your memories.