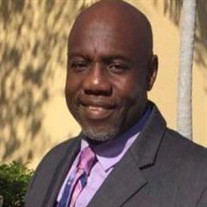 Ronald André Blue was born a twin to Charlie Blue, Jr. and the late Frances Mims Blue on August 31, 1960 in Ft. Lauderdale, Florida. Ron grew up in a home filled with love, support, laughter, discipline and sports. In his formative years Ron attended Pompano Beach Elementary and Middle Schools. He and his twin Arnold were active in Pompano city recreational sports on baseball, basketball, football and T-Ball teams. Ronald graduated from Pompano Beach High School in 1978 and was active on the freshman, junior varsity and varsity football teams. He joined the United States Army soon after graduation and served for four years. Early in his life the family was active members of Bethel AME Church in Pompano and Ron was active in all church activities including the youth choir. Proverbs 22:6 (NIV) Start children off on the way they should go, and even when they are old they will not turn from it. In his youth Ron went on a venture that required the family to be in con- stant prayer for God’s guiding hand of protection. Ron came to know the Lord as his personal savior and was continuing to grow in the grace of the Lord until the end. He believed God and was ready to go to his eternal home. He was a member of Mount Bethel Ministries and was a frequent visitor at local churches in the community until his illness. Ron had an entrepreneurial spirit and had an active work history with various jobs throughout his career he used his persuasive speaking talents and skills. Ron formed his own real estate company RPM Real Estate Investors. His last place of employment was with the Veterans Administration Medical Center in Miami, Florida as a parking attendant. Ron lived a colorful life and enjoyed his life to the fullest. He never met a stranger and had a huge comedic personality. Ron knew how to lift your spirit, make you laugh and crack you up to tears. He was also a sports enthusiast and loved the University of Miami, the Miami Dolphins, and the Miami Heat. Ron deeply loved his family and close friends and was always concerned about their well -being. His co-workers, attending physicians and caregivers at the VA Hospital were as close to him as if he were their family member. Ron left us with many memories and “Ron” stories that we will share until the end of our days. Ron was preceded in death by his mother Frances Mims Blue in November 2018. He leaves to cherish his life and mourn his passing: His father Charlie Blue Jr.; his twin brother Arnold Blue, Pompano Beach, FL; sisters Chandra Schaeffer-Lewis (Adolph) of Fairburn, Georgia and Denequa Michelle Blue of Fairburn, Georgia; first cousins who were raised together as siblings Richard Screen, Miami, FL, Clifford Screen of Orlando, FL, and Naomi Screen, Tallahassee, FL; nephews Brentis Schaeffer (Be’Nisha) of Fairburn, Georgia, Blaize Schaeffer and Brionna Schaeffer of Fairburn, Georgia; Kwianna Lewis, Kennesaw Georgia; David Lewis (Michelle) Orlando, FL, great nieces and nephews Brentis Schaeffer Jr., Brielle Schaeffer, Braeden Schaeffer, Braxon Schaeffer all of Fairburn, Georgia; Marleigh Lewis of Orlando, FL; uncle David Blue (Neomia); aunts Eunice Mims Utica, New York; Ozetta Robinson Neptune New Jersey, Juanita Toomer (Cyrial) Lilburn, Georgia; Janie Dennis (Charlie) of Rembert South Carolina; Albertha Love (Raymond) of Greensboro North Carolina; Jeanie Carter Marietta, Geor- gia and her family; his god-family the Wooten’s; numerous cousins, close friends and especially Pamela LaCue, her son Miles LaCue and their family. Burial will be on Monday 10:15am lane 5

Ronald Andre&#769; Blue was born a twin to Charlie Blue, Jr. and the late Frances Mims Blue on August 31, 1960 in Ft. Lauderdale, Florida. Ron grew up in a home filled with love, support, laughter, discipline and sports. In his formative years... View Obituary & Service Information

The family of Ronald Andre Blue created this Life Tributes page to make it easy to share your memories.

Ronald André Blue was born a twin to Charlie Blue, Jr. and the...

Send flowers to the Blue family.