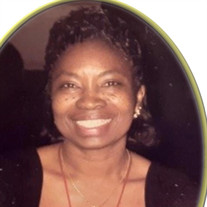 Jessie Regina Laws was born on February 14, 1947 in Pompano Beach, Florida to the parentage of Ira and Eulissee Laws. She is preceded in death by both parents and sister, Elnora Holloway. She is the fifth of eight children. Regina accepted Christ as a young child at Mt. Calvary Baptist Church where she served faithfully many years. Later, she moved her membership to Abyssinian Baptist Church and served until her passing. She served in various capacities: Women’s Ministry, Deaconess, Finance committee, Usher and Education committee. She was also a member of the Abyssinian’s Thespian Ministry where she was “Actress Extraordinaire.” She graduated from Blanche Ely High School in 1965. She later attended Brown College in Durham, North Carolina. Regina met and married John Jones and moved to Pittsburg, Pennsylvania. To this union, a son, John Vincent Jones was born. Not being able to adapt to the cold climate, she returned to Pompano Beach, later marrying Jimmie Glenn. On March 24, 2018, she married Ben Wynn, III. She was employed by the City of Pompano Beach in various positions. She retired after 25 years of service from the utility department. After retirement, she volunteered at Imperial Point Hospital and Mt. Calvary Baptist Church Pantry. Regina was an active member of the Blanche Ely High School Class of 1965 enjoying years of comradery with her classmates. Regina was a member of the United CBer’s Club of Florida and White Cactus Women’s Club. Her favorite sports were traveling and shopping. On Thursday, 11/12/2020, the Lord had a vacancy. Qualifications: spiritual, loving, vivacious, ready laughter, overly friendly and eager to serve the Lord. He zoomed in on Regina Wynn and called her to fill the position. Lord we miss that loud laughter, but you know best. Regina leaves to cherish her memories: her adoring husband Ben Wynn III, one son John V. Jones (Ann), two stepchildren Chauncell Wynn and Ben Wynn, one granddaughter Jayla Jones, four step grandchildren Jana Graham, Darian Graham, Brees Elloitt and Keilani Wynn, six siblings Gwendolyn Hodge (Robert). Patricia Coleman, Minnie Campfield, Theola Laws, Marsha Laws, and Manford Laws, she was preceded in death by sister, Elnora Holloway; one aunt, Essie Seymour Miami, Fl and a host of beloved nieces, nephews, other family and friends who cherished and adored her.

Jessie Regina Laws was born on February 14, 1947 in Pompano Beach, Florida to the parentage of Ira and Eulissee Laws. She is preceded in death by both parents and sister, Elnora Holloway. She is the fifth of eight children. Regina accepted Christ... View Obituary & Service Information

The family of Regina Laws Wynn created this Life Tributes page to make it easy to share your memories.

Send flowers to the Wynn family.