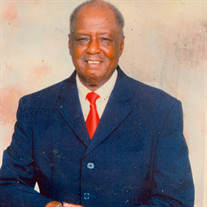 Randolph McLemore, the 2nd of 11 children, was born November 26, 1936 in Pompano Beach, Florida to the Late Willie McLemore, Sr. and Tressie Horne McLemore. Randolph grew up in a loving neighborhood with lots of siblings and friends. He was also very inquisitive about the how and why things worked, often taking things apart and putting them back together. As most of the community, he was a product of Broward County Schools. Randolph competed in basketball as a high school student and graduated from Blanche Ely High School in 1955. After graduation, Randolph, because of health issues, was unable to serve in the military and chose instead to take up a program in Cleveland, Ohio for appliance repair. He worked in that area as long as his health allowed. He was employed by Abbott Appliances as a service worker whose job called for the delivery and installation of household appliances. He received certification in this field from Whirlpool Inc. He worked at this job until he was injured and put on disability. He later became the primary caretaker of his disabled father. He was literally born and raised two doors from Bethel AME Church. Growing up in the church he served from youth until health issues made him unable to physically serve. He served over 70 years at Bethel AME. During his tenure at Bethel, he was involved with various ministries such as the Lay Organization, the Combined choir; Class Leader; the Male Chorus; he was a member of the Trustee Board where he served faithfully for many years. He also served on the Steward Board. Randolph’s greatest contribution to worship was his fervent prayers where he gave God all glory and praises for allowing him to serve. Randolph expired on May 21, 2019 still praising our Lord. Randolph never married but enjoyed the presence of his siblings, cousins, nieces and nephews as well as neighbors. He was loved and respected by all as a great role model. Randolph was preceded in death by his parents Willie, Sr. and Tressie Horne McLemore; brothers Willie, Jr., Charles Edwards and Thomas Ira; and sister Alice Marie Phillips. His surviving relatives include sisters Eugenia Gordon and Bernice Harris; brothers Richard Earl (Linda), Alphonso Bernard and Henry Leon (Beverly); sister-in-law Maggie (Willie Jr.); one aunt, Daisy Wells McLemore and many nieces, nephews, great nieces, great nephews, numerous cousins and wonderful friends who are left to mourn a great and loving uncle and Father figure.

Randolph McLemore, the 2nd of 11 children, was born November 26, 1936 in Pompano Beach, Florida to the Late Willie McLemore, Sr. and Tressie Horne McLemore. Randolph grew up in a loving neighborhood with lots of siblings and friends. He was... View Obituary & Service Information

The family of Randolph McLemore created this Life Tributes page to make it easy to share your memories.

Randolph McLemore, the 2nd of 11 children, was born November...

Send flowers to the McLemore family.