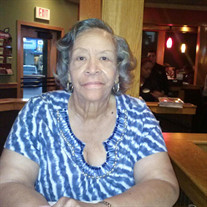 A Life Well Lived To everything there is a season, and a time to every purpose under the heaven. Ecclesiastes 3:1 A TIME TO BE BORN Pauline Graham Glenn wasthesecondchildborntothelate John and Rossie Graham. Loving memories of her childhood where she was educated in Thomasville School System in Thomasville, Georgia were often shared. A TIME TO WORSHIP Pauline’s life truly epitomizes the song, “May the Work I’ve Done Speak for Me”. She accepted Christ and was baptized at an early age Blooming Light Baptist Church. In July 1974, Pauline united with Greater New Bethel Baptist Church, under the leadership of the previous Pastor, Rev. Dr. G. David Horton. Pauline was extremely involved in the mission and work of the church. Her involvement in the ministries included, Sunday School Teacher, Mission President, Usher, Culinary, Hospitality and Mother’s Board Servant Leader. She also served as the Church Clerk and sat on the Board of Directors of the church. Pauline’s passion was decorating the church on special occasions, her work was as unto the Lord, a work of excellence. She loved her Pastor, Rev. Wallace and church family. A TIME TO LOVE When Pauline was a young girl she met a young boy named James L. Glenn. They were childhood sweethearts, upon graduation, James and Pauline were united in holy matrimony. James enlisted in the Armed Forces and he and Pauline traveled the country together. After James was discharged, they relocated to Florida (Opa-locka) where they planned to start a family and grow old together. In 1966 James answered the call of our Heavenly Father and transition into the heavenly army, no children were born to this union and Pauline never remarried. A TIME TO WORK Pauline was employed with AT&T for more than 30 years. Pauline loved the Lord and the work of the Lord, so it was no surprise when she begin to work for the church, which lasted more than twenty-five years. A TIME TO MOURN On January 23, God saw that His faithful servant had labored enough her work on earth was done, she had finished her course and called her home. She is preceded in death by three siblings. She leaves to cherish her loving memories One Brother, John (Diane) Graham; One Sister, Mary (Leroy) Turner; One Special Uncle, James (Lula) Graham; Nephews; Ronald, Joel, Arthur, Robert, Leroy, Jason, Jeff, Kearney and Joe; Nieces, Carolyn, Angela, Diane, Laura, Deatra, Ericka, Lisa, Renae and Kimberly; God Children, Freddie and Rosa Judson, Arnie and Carol Weatherington, Renae Horton and Ulysses “Trey” Davis; A Special Adopted Daughter, Paula Davis; Special Friend Carolyn P

A Life Well Lived To everything there is a season, and a time to every purpose under the heaven. Ecclesiastes 3:1 A TIME TO BE BORN Pauline Graham Glenn wasthesecondchildborntothelate John and Rossie Graham. Loving memories of her childhood... View Obituary & Service Information

The family of Pauline Graham Glenn created this Life Tributes page to make it easy to share your memories.

A Life Well Lived
To everything there is a season, and a time...

Send flowers to the Glenn family.