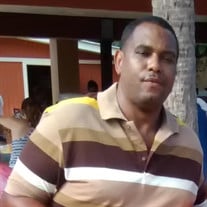 Patrick Ali Howard, affectionately known as “Petey” or “Pete” in his younger years, was born in Dallas, Texas on September 30, 1981 to Percy and Pat Howard. He was the third and last child born to the family. Patrick was called to his heavenly home on Sunday, November 1, 2020 while at his earthly home in Pompano Beach, Florida. Patrick grew up in Garland, Texas. Shortly after birth, he was baptised at Hamilton Park United Methodost Church, where he became active in church affairs as soon as he could walk. He became an acolyte, an active member of the church sponsored cub scouts, the youth choir and various other church sponsored activities. He started swimming as soon as he could walk and jumped off the diving board just before he was 9 months old. Pete attended Routh Roach Elementary, O’Banion Middle School and Rowlett High School, where he excelled consistently in athletics. He participated in Garland summer track, where he racked up mostly first place awards, but some second place awards in the 100, 200, hurdles, discus and shot put. When he was in first grade, he could beat the fastest person in the third grade class in a foot race. He was a superstar on his 5th and 6th grade basketball teams and was the tallest player on his team. Pete was also a super star in martial arts, accumulating numerous trophies. In Abilene, TX at a major tournament, he came in first place in an elimination match beating all the competition, all of whom wore advanced belts, while he was only a white belt. He also beat a contestant who was in a higher age group in a boxing match at the kick boxing gym. He never lost a match. In spite of his outstanding achievements in track, basketball and martial arts, Pete’s favorite sports activity was football even though he didn’t start playing until he was in high school. As would be expected, he excelled in football and was one of the most highly recruited players (tight end) his senior year. For two consecutive years, he helped his team, Tyler Jr. College, make it to the play offs, winning one and making it to first runner up in the other. After that, he again became one of the most highly recruited players in the area. Leaving college, Pete moved to Fort Lauderdale where he could be close to his many uncles, aunts and cousins. In Florida, Pete began working in the field of telecommunications. After a few years, he moved back to Texas where he worked as a car salesman and where he also worked in security. Pete started missing the beaches, so he had to return to Florida where he started working for his uncle at Choices Children and Family Consortium and also playing football in Miami for the AFL. His football career ended when he suffered a torn ACL right in the middle of a game. With hopes of a future in football dashed, Pete returned to Texas and pursued a career as a contractor, doing demolitions and home repair. He also worked in the security industry part-time. However, after determining he did not have a passion for contracting, he returned to Florida. Patrick worked toward learning the house flipping business for a while. Ultimately, Pete determined that security was the area where he had worked consistently throughout his adult life where he was in high demand. He worked security in Miami for about 2 years. About 8 months ago, he secured a position as security supervisor for a service in Pompano Beach. He loved his job and determined this was his passion. He had secured training and licenses that made him an essential member of the security industry. At the time of his death, Patrick was studying and making plans to start his own security business some day. Throughout his life, Patrick was known for his sense of humor and his love of family. Spending time with family was what made him the happiest. He was greatly loved and will be sorely missed. Patrick is survived by his parents, Percy and Patricia Howard; grandmother Nan Lloyd; sister Pamela Howard Williamson (George) of Upland, CA; brother Philip Howard of Garland, TX; brother Cody Howard; 2 nieces Gabrielle and Gianna Williamson; maternal cousins Franklin and Thomas Graham; Dr. Joseph Britton (Nancye), Vincent Britton, Thomas Britton (Tracey), Sherman Britton, Carter Britton; paternal cousins Wylie Howard, Jr., Rissy Howard, Kisha Howard, Valerie Gina Howard, Arthur “Skip” Howard, Kelly Howard LeSane, Darwin Howard, Kinte Darlington; too many uncles, aunts and other cousins to list; his very special best friend Johanne Philogene.

The family of Patrick Ali Howard created this Life Tributes page to make it easy to share your memories.

Send flowers to the Howard family.