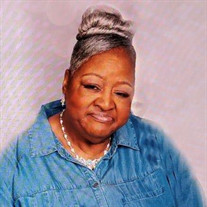 Nina Lee Walton was born on January 26, 1942, in Aiken, South Caroli- na to the late Samuel and Sarah Gordon. She was the oldest of four girls. At an ear- ly age, the family relocated to Pompano Beach, Florida where she attended Broward County Public Schools. Later on, she met Levonia Walton, and they married in May of 1958. Unto this union, they were blessed with five children: four boys and one girl. Nina was a devoted Christian, wife, mother, grandmother, great-grandmother, sister, aunt, and loved-one to many people. She loved to cook, and everyone knew that they could stop by and get a plate no matter if they were family or not. She opened her home to many people that needed shelter and didn't expect anything in retum. Because of her selflessness, she lived a blessed life and God continued to provide her every need. She was indeed a "Big Mama" to several individuals. She gave her life to Christ at an early age and had been a woman of faith ever since. Nina was a faith- ful member of Trinity Church of God in Christ under the leadership of Pastor Frankie Walls and was a Mother of the church. Although she was loved here on earth, her work here had been completed. God de. cided to call his precious angel home on January 30, 2022 at 5:02 a.m. Nina leaves to cherish her beautiful memories: a devoted husband, Levonia Walton; four chil- dren; Randy Walton of Lexington, Kentucky, Connie Walton of McDonough Georgia, Elzy (Frank) Walton of Pompano Beach, Florida, and Johnnie Walton of- Brunswick, Georgia; one child preceded her in death, Michael Walton who resided in Pompano Beach, Florida; one step-daughter, Renee Cornish; one sister, Dorothy Gordon of Deerfield Beach; two sisters preceded her in death, Mattie Tucker (Julius) who resided in Parkland, Florida and Carolyn Lane (William) who resided in Fort Lauderdale, Florida; one niece, Doris Wiggins; eight nephews, Samuel Gor- don, Willie Wiggins, Lorenzo Baldwin, Heath Baldwin, Reginald Lane, William Lane, Willie James (JJ), Levem Lane; three special cousins, Inez Johnson, Jacquel ine Hill, and Shirley Williams; her hair stylist of over twenty-five years, Jennifer Calloway; nail technician of over twenty-five years, Chanelle Johnson; thirty-four grandchildren, sixty-seven great-grandchildren, and a host of great meces, great nephews, cousins, and friends.

Nina Lee Walton was born on January 26, 1942, in Aiken, South Caroli- na to the late Samuel and Sarah Gordon. She was the oldest of four girls. At an ear- ly age, the family relocated to Pompano Beach, Florida where she attended Broward County... View Obituary & Service Information

The family of Nina Lee Walton created this Life Tributes page to make it easy to share your memories.

Send flowers to the Walton family.