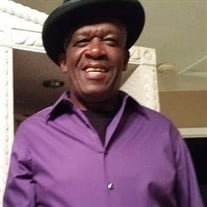 Mr. Mitchell Davis, Jr. was born in Vidalia, Georgia on May 19, 1952. He was the son of the late Mitchell Davis, Sr. and the late Julia Mae Hilbert Davis. He entered into eternal rest on Monday, January 6, 2020. Michell attended school in Montgomery County, GA. He moved to Pompano Beach, FL in 1987 and married Barbara Barther on November 7, 1992. He began his career with the CSX Railroad in 1976 as a Trackman. He was later promoted to Foreman until his retirement in 2017. Growing up, Mitchell was affectionately known to family as “Buddy” and as Mitch by friends and others. He was a loving, outgoing person with a smile that cheered you up, especially if you were down. He was known for his great sense of humor and for cooking some of the best ribs. His love and the willingness to share with others was reflected in everything he did and most especially in the lives of those he touched. He made everyone feel special when in his presence. He was a loving man that wore many hats. He was a devoted husband, father, grandfather, brother, and friend. He was preceded in death by his siblings, Rosa Lee Harris, Cora Lee Wadley, Willie Davis, Sr., and Zonnie Beasley Wilcox. He leaves to cherish his memories his loving wife, Barbara Barther Davis of Pompano Beach, Florida; his children: Mauricio Lashon (Lashandria) Davis of Eufaula, Alabama; Marcus Emilio (Melissa) Davis of Vidalia, Georgia; Donditrick (Tammy) Barther of Pompano Beach, Florida; Melton (Samantha) Rozier of Jacksonville, Florida; Valerie Davis of Vidalia, Georgia; and Shaquillia Haugabrook of Atlanta Georgia; his sisters: Mamie (Willis) Harmon of Swainsboro, GA; Louise (William) Phillips of Vidalia, Georgia; Reba Jewel Brown of Summerville, New Jersey; Bertha Lewis of Decatur, Georgia; his brothers: Raymond (Louella) Davis, Summerville, New Jersey; Willie (Mamie) Davis, Philadelphia, Pennsylvania; his uncle: Charles (Lannie Lee) Hilbert) of Miami, Florida; his aunt: Odessa Davis Eason of Valdosta, Georgia; his sister-in-law, Marilyn (Robert) Barther of Pompano Beach, Florida; his brother-in-law, Willie C. (Jenny) Barther of Pompano Beach, Florida; and Alvin Vaughns of Ft. Lauderdale, Florida; 19 grandchildren, 2 great grandchildren, and a host of nieces, nephews, other loving relatives and dear friends, all of whom will miss him dearly. Obituary

Mr. Mitchell Davis, Jr. was born in Vidalia, Georgia on May 19, 1952. He was the son of the late Mitchell Davis, Sr. and the late Julia Mae Hilbert Davis. He entered into eternal rest on Monday, January 6, 2020. Michell attended school in... View Obituary & Service Information

The family of Mitchell Davis Jr. created this Life Tributes page to make it easy to share your memories.

Send flowers to the Davis family.