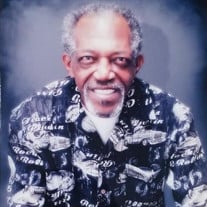 Reflections of Life & Legacy “To everything, there is a season and a time to every purpose under heaven.” Ecclesiastes 3:1 A Time To Be Born On January 15, 1943, in Baxley, Georgia, the earth gifted the birth of Millard Davis McCleod to the parents of the late Rufus (Rueben) McCleod and Aline (Gamble) McCleod. A Time to Plant As a child, Deacon Millard McCleod moved to Pompano Beach, Florida, with his family. He attended grade school at the Pompano Colored School and graduated from Blanche Ely High School in 1961. Later that same year on August 25, 1961, he married the woman of his dreams from Sylvania, Georgia, Helen James in which Blanche Ely had to sign the Marriage Certificate because Helen’s father Junious James was still moving his family from Georgia. To this union four children were born. A Time to Work Deacon Millard McCleod, was an Auto Body Mechanic by trade. Before landing at Harbour Chrysler and Terry Ford. He built race cars and dune buggies. He and the late Deacon Edward Goodrum had the fastest race cars in South Florida one known as “Mission Impossible”. After working for Terry Ford for over 20 years a back injury forced him to leave and later he would land the job of his dreams working for the Zimmer Corporation building the world famous “Excalibur”. He would fulfill two special orders in which he built one for Lou Rawls and the other for Joe Jackson father of the Jacksons or the Jackson 5. His hobbies were numerous. He was an Artist and photographer and painted many famous paintings one in which he painted on the front wall in the main sanctuary of the church (First Baptist Church of Collier City where he would later serve as Deacon) a portrait of Jesus Christ in the Garden of Gethsemane. Later, he would start a photography business and was one of the first Black business to open a Photo Shop and began photographing weddings and other events. He was a championship Golfer. Deacon Millard McCleod, Bishop Ralph Grissett, Fred Brown, Sylvester Smith, Mr. Green, Mack Reed, and Mr. Alfair would be the first Black Golfers to play on the exclusive and pro circuit Golf Course, “The Inverrary” in Lauderhill, Florida. One of his accomplishments was to play alongside Professional Golfing greats Calvin Peete and Lee Elder. He was also involved in the community and participated in many marches and protests in Pompano Beach and was one of the founders of the Collier City Cowboys which would become the Pompano Cowboys. Because of his activism he would later join forces with Major Hallman and volunteer as a Fireman for the Collier City Fire Department in which he become known as “Fireman”. He would later serve as Captain and become promoted to Battalion Chief. Other hobbies included fishing, checkers and spades tournaments. A Time to Serve As a teenager Deacon Millard McCleod had the gift of singing and he would sing with many quartet groups such as the Florida Nightingales and alongside the late Rev. James Douse. His passion for singing would cause him to join a young choir full of singers and talent and considered to be one of the best in the State of Florida, the First Baptist Church of Collier City and would lead such songs as Born Again, Like a ship that’s tossed and Driven and No Cross, No Crown. There he served on the Trustee Board and as a Sunday School Teacher for Class #2. Later he was chosen to serve as a Deacon all under the leadership of Rev. Dr. J.L. Talton at First Baptist Church of Collier City. After a brief hiatus he would later join his son Bishop Dr. Gary B. McCleod and serve as a Deacon and Adult Sunday School Teacher at the Mt. Sinai Missionary Baptist Church of Deliverance in Pompano Beach, Florida. He left a legacy and example for everyone he touched. A Time to Die Deacon Millard D. McCleod departed this life on Saturday, October 23, 2021 at his residence in Pompano Beach, Florida. He leaves to cherish his memories a devoted wife for over 40 years Helen James McCleod; His children, two sons, Bishop Dr. Gary B. McCleod (Synthia) of Coral Springs, FL, Rufus McCleod (Twanda) of North Lauderdale, FL, four daughters, Janice Bynum (Kenneth) of Pompano Beach, FL, Karen Watkins (Isaac) of Pompano Beach, FL, Kimberley McCleod, Cedar Rapids, Iowa, and Victoria McCleod, Fort Lauderdale, FL. Two Goddaughters, Tammy Hall, Fort Lauderdale, FL and Sebrina Irving-Robinson (Robert), Tamarac, FL. One sister, Ruthie McCleod Bell (Dr. Herbert Bell, Jr.), Durham, North Carolina. One Aunt, Gertrude Gamble, Baxley, Georgia. His parents Rufus and Aline McCleod, his father and mother-in-law Junious and Earnestine (Boyd) James and his brother John (Alton) McCleod, and one granddaughter Latonya McCleod Rigby preceded him in death. 21 Grandchildren, Elaina, Tremickia, Tasia (Trice), Ronny, Kim, Crystal, Candice, Jasmine, Gary (Ashton), Davon, Caleb, Isaac, D’ante, Jer’eka, Aliyah, Tiana, Taquan, Tiara, Jaden, Kenneth, Jr., Na’riya, and Jaden; 18 great grandchildren, and a host of nieces, nephews, cousins, and a world of friends.

Reflections of Life & Legacy &#8220;To everything, there is a season and a time to every purpose under heaven.&#8221; Ecclesiastes 3:1 A Time To Be Born On January 15, 1943, in Baxley, Georgia, the earth gifted the birth of Millard Davis McCleod... View Obituary & Service Information

The family of Deacon Millard Davis McCleod created this Life Tributes page to make it easy to share your memories.

Reflections of Life &amp; Legacy
“To everything, there is a season...

Send flowers to the McCleod family.