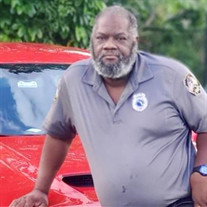 A Time to Be Born . . . Michael Turner was born December 16, 1959, in Ft. Lauderdale, Florida to the parents of Reverend Hugh C. Turner, Sr and the late Mary Gallon Turner. A Time to Reflect . . . Michael began his journey of worship at St.... View Obituary & Service Information

The family of Michael Turner created this Life Tributes page to make it easy to share your memories.

Send flowers to the Turner family.