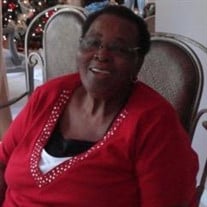 Martha Ann McGhee was a loving mother, grandmother, sister, and friend. In the early evening hours of Friday, January 7th, at the age of 89, she left this world to be with the Lord. On September 5th 1932, Martha Ann McGhee was born in Madison, Florida to the late James and Annie McGhee. She was born into a large family consisting of 10 siblings. In the early part of her life Martha, along with her two daughters moved to Mt. Clemons, Michigan where she worked as a licensed beautician. She was a long-time member of Bethlehem Temple Apostolic Faith Church, (PWA), where she served as a missionary, while working tirelessly in the kitchen preparing meals after each service. Martha had a deep passion for cooking and baking. She was always known to have something cooking on the stove. If you were a visitor to her home you could be assured that you were in good hands and would have a home cooked meal to enjoy. Along with cooking, Martha enjoyed sewing and spending time with family and friends. Later in life Martha earned a Certified Nursing Assistant certification. Martha worked for many years as a Certified Nursing Assistant at a Michigan nursing home and then at General Hospital in Mt. Clemons, up until her retirement. She then moved back to Florida, where she would reside in the Fort Lauderdale area for the next thirty years. She was a member of The Faith Center Ministries serving on the alter worker and nursing home ministries. She also had church membership at Trinity Church International, in Lake Worth, Florida. Martha loved the Lord, she was often seen reading the scriptures, and for any situation that arose, you would always hear her say two simple phrases, “God’s got a way” and “Say some prayers.” She is survived by her two daughters, Wanda M. Spate and Donna D. Smith (Jacob); Grandchildren: Jermaine Spate, Lanika Spate, Trenise Spate, Kristen Pinkney, and JaCobyNa Smith. Great-Grandchildren: Menelik Spate, Shawntia Johnson, Deshon Spate, Jamila Johnson, Tanisha Spate, and Gavin Moore; Great-Great-grandchild: Dajohn Spate, Jr. Her remaining siblings Samuel McGhee (Lola) and Mary Solomon, and a host of nieces and nephews

Martha Ann McGhee was a loving mother, grandmother, sister, and friend. In the early evening hours of Friday, January 7th, at the age of 89, she left this world to be with the Lord. On September 5th 1932, Martha Ann McGhee was born in Madison,... View Obituary & Service Information

The family of Martha Ann McGhee created this Life Tributes page to make it easy to share your memories.

Martha Ann McGhee was a loving mother, grandmother, sister, and...

Send flowers to the McGhee family.