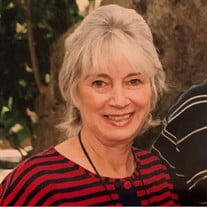 Marlene Patricia Fulton, 78, of Fort Lauderdale, FL passed away peacefully surrounded by her family on March 23, 2019. She was born to William and Marie Ellison in Detroit, MI on November 3, 1940. She is survived by her husband, Walter (aka Buck), her 4 children, Michael (Cathy), Wenter (Jason), Bucky (Jodi), and Wayde, and 11 grandchildren, Dustyn (23), Stephen (19), Aidan (16), Landon (15), Carsen (13), Camryn (12), Brendan (12), Avery (12), Lindsey (12), Payton (11), and Brooke (10). She was a hairdresser for many years and owned two salons throughout her lifetime. She later worked at Fulton Advertising Agency and was co-owner of The Texan Steakhouse. She also enjoyed doing home party sales such as Avon, Tupperware, PartyLite, and Petra Fashions. She was very active as a Scoutmaster in Boy Scouts and as a troop leader in Girl Scouts. But her favorite part of life was spending time with her family (both biological and friends that would become like family). She always joked that she never knew how many kids were going to be over for dinner so she always cooked as though she was cooking for an army. This continued even after the kids had moved out of the house. She said she didn't know how to cook small dishes and would call to have leftovers picked up. Once you were family you were family, and it didn't matter if there was a divorce/separation or how long it had been since she saw you. She loved her children and grandchildren immensely and she was so proud of them. She never missed an opportunity to talk/brag about them to strangers. She will be missed dearly. A celebration of her life will be on Sunday, March 31, 2019 at 2 pm at the L.C. Poitier Funeral Home in Pompano Beach and burial will be at a later date.

Marlene Patricia Fulton, 78, of Fort Lauderdale, FL passed away peacefully surrounded by her family on March 23, 2019. She was born to William and Marie Ellison in Detroit, MI on November 3, 1940. She is survived by her husband, Walter (aka... View Obituary & Service Information

The family of Marlene Patricia Fulton created this Life Tributes page to make it easy to share your memories.

Send flowers to the Fulton family.