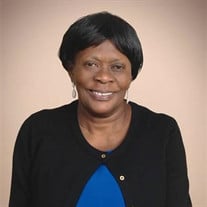 Dedicated retired homemaker, Marie Brutus 69, gave it her all until she was called home on Sunday, May 3, 2020 in Fort Lauderdale, Florida. She was born on December 12, 1950 in Port de Paix, Haiti to her late parents Merite Sylvain and Michel Pierre. Marie arrived in the USA on July 4, 1980 from her home country of Haiti to pursue a better living. It was truly a celebration which she has commemorated throughout her life. She married in 1983 to her late husband Esperandieu Prospere in Pompano Beach, Florida. She then gave birth to three beautiful children whom she loved and cared for dearly. After the passing of her husband and son, Marie continued to raise her daughters under the strict fashion of a Haitian mother. She lived in Pompano Beach, Florida where she dedicated her life to caring for various family and friends. She was truly the favorite neighborhood mother. Most people called her mom. Marie leaves a legacy of generosity. She was known as a giver, dedicated hard worker, a strong woman, and servant of God. Marie enjoyed spending time with family. One could always depend on Marie to be there in any time of need. She looked after many children who know her as grandma. Marie is survived by Fanette Prospere and Monique Prospere (children), Marc Brutus (brother), Fonise Brutus (sister), Nathan Martino (son-in-law), Ethan Martino and Isiah Martino (grandchildren), Sendley, Aiden, Marvin, and Dieufort (nephews), Manette, Julietta, Linda, Marlene, Guerda, Joanne, Yvonne, Sirena, Vickey, Dieula, Verena, Rosemene (nieces), and a host of friends and families; Prospere, Sylvain, Cyrille, Esthelhomme , Yasaint, Octamar, Alcenor, Joseph, Jean, Pierre, Charles, Desinor, Etienne, Meus, Moimeme, Monfleury, Telisma, Desrameaux, Lebrun, Jean-Baptiste, Saunders, Eloisin, Pierrelien, Cyriac families whom she held near and dear to her heart. Deceased: Esperandieu Prospere(husband), Benson Prospere (son), Merite Sylvain & Michel “Dotin” Pierre (parents), Florentin “Mamoun”Pierre (brother), Vernia Brutus (sister), Leroy Brutus (nephew).

Dedicated retired homemaker, Marie Brutus 69, gave it her all until she was called home on Sunday, May 3, 2020 in Fort Lauderdale, Florida. She was born on December 12, 1950 in Port de Paix, Haiti to her late parents Merite Sylvain and Michel... View Obituary & Service Information

The family of Marie Brutus created this Life Tributes page to make it easy to share your memories.

Dedicated retired homemaker, Marie Brutus 69, gave it her all...

Send flowers to the Brutus family.