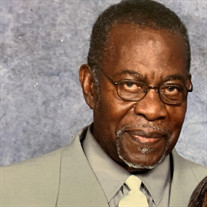 Celebrating The Life of Mack Martin Jr. For though I be absent in the flesh, yet am I with you in the spirit, joying and beholding your order and the stedfastness of your faith in Christ. Colossians 2:5 Deacon Mack Martin, Jr. was born to the Late Alice Judson and Mack Martin, Sr. and later raised by the Late Isaac Judson in the city of Pompano Beach, FL on June 21, 1940. In his early years, he was educated at Coleman Elementary and graduated from Blanche Ely High School with the Class of 1959. During his high school years he was a member of the All American Football team and they nicknamed him “Sweet Pea.” He was a dedicated and hard worker. He was employed at S&S Scaffolding for over 20 years as well as Broward County Waste Management supervisor where he retired. In the late 70’s he joined Macedonia Missionary Baptist Church under the leadership of the late Pastor James L. Douse and is still currently a member under the leadership of Reverend Louis Sanders. Mack was passionate about his heavenly father’s business. He continuously under the work for the upbuilding of God’s kingdom. His work in the church was immeasurable. He was a faithful and diligent trustee, Chairman Deacon, Choir member, usher board president and many other auxiliaries until his health would not allow him to be. Mack was a devoted member of the Masonic Lodge (Saba Temple #186) where they help support and serve the community and service the community for many years. He loved fishing and talking nice long rides just to talk and sing about the Glory of God. Two of the happiest things he enjoyed was having a family picnic which he called “My Children Family Reunion” and hosting his Family Gospel Extravaganza. On the early morning of Tuesday, April 2, 2019, Deacon Mack Martin Jr., answered the call and made his transition from this earthly journey to eternal rest. Through out Mack’s illness his daughter Jacqueline Lee was by his side without hesitation and with love assisting to his needs. Cherished memories will always linger; he leaves to mourn his precious wife, Minnie Louise Martin of 43 years; daughters: Debra (Duncan) Bethel, Jacqueline (Dylan) Lee, Sherry (Darrell) Holmes, Patricia (Byron) Hall, Angela (Darren) Walters, KayTrina Allen; sons: Marvin Marshall, Mack Martin Jr., Gregory (Yvonne) Marshall, Walter (Sharon) Martin, Robert Marshall, Todd Martin, Richard (Tamiko) Allen; sisters: Aretha Martin, Barbara Permentor, Gloria (Alvin) Bryant, Marie Martin, Margaret (Daniel) Underwood, Diane Woodson, Bernice Martin; brothers: Willie (Veronica) Martin, Richard Martin, Paul Martin; 34 grandchildren, 41 great-grandchildren, Goddaughters: Nicole Bee-Williams and Veneka Lindsey. A host of nieces, nephews, cousins and friends.

Celebrating The Life of Mack Martin Jr. For though I be absent in the flesh, yet am I with you in the spirit, joying and beholding your order and the stedfastness of your faith in Christ. Colossians 2:5 Deacon Mack Martin, Jr. was born to the... View Obituary & Service Information

The family of Mack Martin Jr. created this Life Tributes page to make it easy to share your memories.

Celebrating The Life of Mack Martin Jr.
For though I be absent...

Send flowers to the Martin family.