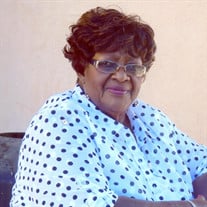 A Time To Be Born….. Loletha McKenzie was born on September 10, 1933 in Miami, Florida. She was the first of nine siblings born to the late Samuel Sr. and Louise Farrington Stewart. She accepted Christ at an early age. Attending Sunday School and Church faithfully with her siblings. She was a woman of faith. A Time of Growth and Development….. Her early education was acquired in the Dade County Public Schools, Miami. After graduating from Booker T. Washington High School. She attended Florida Normal College in St. Augustine, FL., known today as Florida Memorial University in Miami, FL. There she received her B.S. Degree in Elementary Education. She retired from teaching after thirty-five in Broward County School System. While teaching she touched the lives of so many of her former students. Where they kept in contact with her, one I have to recognize she was there until the end. Thank you Gail Pender King. A Time To Love….. In 1952 Loletha McKenzie was united in Holy Matrimony to Robert Wilmore McKenzie. To this union a daughter Janice was born. They moved to Pompano Beach, FL where he preceded her in death on the 23rd of August 1975. A Time To Reflect….. Loletha was a shopper. Going to Burdines, known today as Macy’s department store, where she later became a Board Member. Then as her grandsons got older they became actively involved at Thomas Stephanis Boys and Girls Club of America. She became active as well by serving as a Board Member. Publix was her place to shop, to greet and meet friends. The management and employees always showed her the upmost respect and kindness to her for being a loyal customer. Loletha cherished the time she shared with her family, especially her grandchildren. She looked forward to her daily prayer and spiritual uplifting with Sister Debra Zanders. She enjoyed conversing with her friends, Yvonne Jones of Los Angeles, California, Sara Parker, Sandra Knowles, and Jessie Smith. She had wonderful neighbors that would look out for her and would do just about anything to make her day a brighter one. She cherished the friendship of Marilyn Detken of Coral Springs, Florida, and Madeline Bain of Melbourne, Florida. They were her traveling buddies all the way to Mesa, Arizona and back. A Time To Mourn….. Loletha leaves to cherish her memories: her daughter, Janice M. Johnson and son-in-law, Frank Johnson of Margate, FL; grandsons, Duane Johnson of Pompano Beach, FL and Delvin Johnson (Monica) of Margate, FL; great-granddaughters, Destiny Johnson and Chelseigh Helwig, great-grandson, Jalen Moye; sisters, Margret Getson (Rodney) of Miami, FL, Dr. Mary Thompson of Pembroke Pine, FL; brothers, Ivan Stewart of Miami Gardens, FL, Leo Stewart, Sr. (Mattie) of Miami, FL, William Stewart (Linda) of Opa Locka, FL. Preceded her in death: brothers, Everett and Samuel Stewart, Jr.; sister, Sheryil Stewart. A host of nieces, nephews, cousins, Godchildren and friends. Adopted son, Curtis Shoffner (Gayle).

A Time To Be Born&#8230;.. Loletha McKenzie was born on September 10, 1933 in Miami, Florida. She was the first of nine siblings born to the late Samuel Sr. and Louise Farrington Stewart. She accepted Christ at an early age. Attending Sunday... View Obituary & Service Information

The family of Loletha McKenzie created this Life Tributes page to make it easy to share your memories.

Send flowers to the McKenzie family.