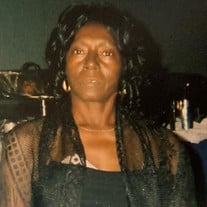 Linda Laverne Jackson was born June 16, 1954 in Moultrie, Georgia. Born to the late Mattie Mae Worthy and Solomon Loud. Linda was raised by Samuel Moore. Linda worked as a nurse for many years at Manor Care in Boca Raton. She departed this life... View Obituary & Service Information

The family of Linda Laverne Jackson created this Life Tributes page to make it easy to share your memories.