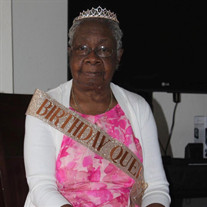 Lillie Beatrice Brown was born on July 25, 1930 on a plantation in Louisville, Jefferson County, Georgia to the late Mr. Willie and Mrs. Helen Blanche Smith Brown. Being her mother’s only child, and the first grandchild, her family doted on her and called her Bea. Bea grew up as a happy and respectful child who learned the value of hard work, education, family and a relationship with the Lord. As a young girl she gave her life to Christ and became an active member of the Eden Baptist Church whose founding members included her great grandparents, former slaves Deacon Isaac and Mother Phibbie Shelman Tolbert. Always a hard worker, Bea not only worked in the fields alongside her family, she managed to graduate as the Valedictorian of her class. Bea spent her early career in the Textile Industry in Louisville until she caught the eye of a dashing young man who just happened to be a son of one of Eden’s Deacon, Columbus Scott, Jr. They married on July 14, 1956 and relocated to Pompano Beach, Florida where economic opportunities were better and remained married and committed to each other and their family for 56 years until God called Columbus home to rest. The Lord Blessed the Scotts with seven children. God also Blessed them to be the first family to move into a new subdivision called Liberty Park Estates. Two years ago in recognition of nearly sixty years as a resident of Liberty Park, the first street whe re the Scott Family resided was renamed Scott Street in their honor. Bea and Columbus worked hard to provide the best they could to help their children to have easier lives and greater opportunities. All seven of their children graduated from high and pursued careers that allowed them to avoid doing domestic and unskilled jobs. While growing up, Bea made sure that their children had a firm Christian foundation. Everything Antioch Baptist Church had for children to participate in, Bea made sure that her children were there for Sunday School, Sunday School Conventions, Christmas and Easter Programs, Usher Board meetings, BTU, the Red Circle and the Sunshine Band and regular church services. Bea was a Den Mother for the Cub Scouts, a Band Parent Booster at Pompano High School and an active member of the PTAs where her children attended school. When her mother became ill and could no longer be left home alone, Bea quit her day job and got a night and weekend job at K-Mart where she worked her way up to being a manager in the Jewelry Department. On Thursday May 6th after more than 90 years, God decided to send one of His Angels to escort Bea for labor to reward. She had kept the faith through many dangers, toils and snares. To honor her legacy she leaves three sons, Sgt. First Class (Ret.) Darrell O. Scott (Reylanda), Martinsburg, WVA; Sgt. First Class (Ret.) Donald W. Scott (Jocelyn), Melbourne, FL; Sgt. Terance U. Scott, I, Deerfield Beach, FL, three daughters, Jacqueline Scott McIntosh, her caregiver, Pompano Beach, FL, Gwendolyn Scott Flowers and Brenda K. Scott, Tallahassee, FL, Sister-in-Law Margaret Scott Clemons, Miami, FL; Brother-in-law, Sherman Scott, Baltimore, MD; Cousins, Gladys Rhett, Rose McGill and Bertha Goddard, Ft. Lauderdale, FL and Eugene Merriweather, Valdosta, GA, 15 Grandchildren, 7 Great grandchildren and a host of nieces, nephews, cousins, E. Pat Larkins Senior Citizen Members, Pastor Freeman and the Greater Antioch Church Family and loving neighbors and friends. Also, preceding her in death, her son, Christopher C. Scott, III, and her daughter- in-law, Melinda Branch Scott.

Lillie Beatrice Brown was born on July 25, 1930 on a plantation in Louisville, Jefferson County, Georgia to the late Mr. Willie and Mrs. Helen Blanche Smith Brown. Being her mother&#8217;s only child, and the first grandchild, her family doted... View Obituary & Service Information

The family of Lillie Beatrice Scott created this Life Tributes page to make it easy to share your memories.

Send flowers to the Scott family.