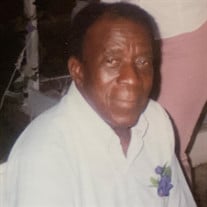 Life in the Bahamas Leo Arlington Cornish was born to Clotilda Bowe and Jeremiah Cornish on August 23, 1930 in Abaco, Bahamas by way of Cornishtown. He was the eldest of 9 children and was respected and honored as the hero of his family. (Siblings - Alphonso (Romelda) Cornish (deceased), Victor (Ervis - deceased) Cornish, Rev. Lernis Cornish (Rovina - deceased), Rev. Jerry (Pamela) Cornish (deceased), Wayne Cornish, Evangelist Edna (Mervyn) Burrows (deceased), Viola (Robert - deceased) Johnson, Evangelist Gelita (Erol) Thurston (deceased), and Larelda (Carrington) Woodside (deceased). Life for Leo was not handed to him on a silver platter. He began working at the age of thirteen dipping and dabbling into many jobs and trades to earn money across the island of the Bahamas. This money was never seen by Leo, as the sole purpose of the money was to support his family. As life on the island became more challenging, Leo’s only dream was to live and become successful in the United States. He constantly encouraged himself with these words, “The plane is going my way, but it’s just not my day”. One day it became his day. Leo was sent to the United States on a contract with the widely accepted company, Green Giant. Accompanied by approximately five thousand other workers, Leo’s job was to pick and crop vegetables of the season. Life in America Leo finally entered the United States in 1955 at the age of twenty. It was here in the states that he met and married the love of his life, Reba Violet Gilbert, affectionately known to him as “Vi” (preceded in death 2007). The couple was married on February 14, 1956. This union produced five children. Prior to Violet’s death, the couple vowed their undying love to each other for a total of 51 miraculous years. There was no doubt about it, Leo was a hard working man and no stranger to work. He used much of what he learned back home in the Bahamas, and the skills obtained on contract to build a comfortable life for his family here in the states. He was employed by WentWorth Plastering and Construction Company as a foreman and scaffolding specialist building many of the high rises seen on the east coast today. In his spare time Leo was the neighborhood mechanic, plumber, fisherman, gardener, landscaper, and builder, all free of charge. Leo would give his last to help a brother in need and took great joy in sharing with the community. Working in God’s Vineyard Prior to Leo’s baptism, he had the innate desire to serve. At the age of thirty, he united his passion of service and committed to serving God and the community by becoming a baptized member of the Salem Seventh-Day Church in Pompano Beach, FL. He worked diligently as an ordained deacon and offered his service to the church by way of groundskeeping and maintenance. Although a man of few words, he was a praying man who loved talking about his wife “Vi”, and the many miracles God had displayed in his life and the lives of those he loved. Leo served others until he could no more. On Wednesday, March 4, 2020 Leo Arlington Cornish took his last breath peacefully in his Pompano Beach home amongst loved ones. The faithfulness and aimable deeds of Leo Cornish have been recorded and sealed, and bear witness to the soon coming of our Lord and savior Jesus Christ. The Cornish Legacy Left to cherish his life and continue on his legacy are his children, Lee Esther (George) Jones, the late Leo Jr. (wife Susie Cornish/ Life long partner Stephanie Gamble) Cornish, Leola (Leslie) Rolle, the late Leon (Cathy) Cornish, the late LeeMiya Cornish, and Martha Cornish; Nineteen grandchildren, thirty plus great grandchildren, and a host of cousins, nieces, nephews, and friends.

Life in the Bahamas Leo Arlington Cornish was born to Clotilda Bowe and Jeremiah Cornish on August 23, 1930 in Abaco, Bahamas by way of Cornishtown. He was the eldest of 9 children and was respected and honored as the hero of his family. (Siblings... View Obituary & Service Information

The family of Leo Cornish created this Life Tributes page to make it easy to share your memories.

Life in the Bahamas
Leo Arlington Cornish was born to Clotilda...

Send flowers to the Cornish family.