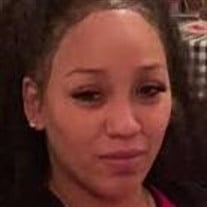 The life and legacy of a Queen, the beautiful Latasha Nicole Walton better know simply as (Tasha or T-Bird for fun) came into this world in the early start of autumn on September 23, 1986 she was born in Ft. Lauderdale at Broward General Hospital.... View Obituary & Service Information

The family of Latasha Nicole Walton created this Life Tributes page to make it easy to share your memories.

The life and legacy of a Queen, the beautiful Latasha Nicole...

Send flowers to the Walton family.