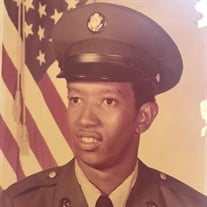 Kenneth Carlton Hawkins was born on October 20, 1956 in Fort Lauderdale, Florida to Dorothy and James Albert Hawkins, which both proceeded him in death. He attended Charles Drew Elementary School and graduated from Nova High School in Davie,... View Obituary & Service Information

The family of Kenneth Carlton Hawkins created this Life Tributes page to make it easy to share your memories.

Send flowers to the Hawkins family.