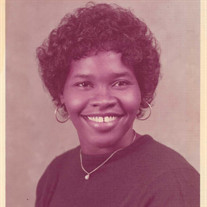 On April 29, 2022, Joyce Thurstia Higgs, committed woman of God, retired educator of young minds and devoted sister, aunt and cousin, passed away at the age of 64. Joyce was born in Pompano Beach, Florida to a loving family. She was named after her mother, Thurstia Grooms Higgs, who passed away before Joyce reached the age of two. Thereafter, she was lovingly reared by her maternal grandparents, Tim And Rosa Lee Grooms, and her mother’s sister, Eula Grooms George and her husband Samuel. Joyce’s Christian faith was nurtured at Mount Calvary M.B. Church. Her grandmother made sure that Joyce and her siblings were involved in church while growing up. She gave her life to the Lord at a young age, under the pastorate of Rev. Samuel Collier. Joyce was active in the youth choir, Sunday School and other programs of the church and provided faithful service to her church family. In 1975, Joyce graduated from Nova High School and continued her education at Morris Brown College in Atlanta, Georgia. Joyce majored in Elementary Education and became a member of Delta Sigma Theta Sorority, Incorporated. In 1979, she completed her studies and graduated from Morris Brown College well prepared to be the outstanding educator that she became. Returning home to Pompano Beach, Joyce was employed as a teacher/specialist at Markham Elementary School, a position she held with distinction for nearly two decades before moving over to Cresthaven Elementary School. Her excellence in the classroom during her career led to her being named Teacher of the Year. She retired from the Broward County school system in, after 18 years of service. As an adult, Joyce joined Black’s Memorial Temple in Pompano Beach, where she was beloved and devoted in service to her church family. She took very seriously II Corinthians 9:7, and she gave “cheerfully and willingly” of her time, talent and treasure to the work of the Lord. At her local church she dutifully served as Sunshine Band President, President of the Feeding Ministry, President of the Youth Department Extraordinaire, Noon Day Prayer Assistant Prayer Warrior and Church Announcer. In the District she served as the Pompano District Announcer for the Women’s Department, The District Sunshine Band President and the Youth Worker for the Young Girls of the Pompano District. She also found time to tutor many of the Youth. Joyce is survived by her four siblings, Carolyn Higgs of Plantation; Cecil Fred Higgs, Jr. and wife Huette of Sugar Land, Texas; Ronald Higgs and wife Villis of Lauderdale Lakes; Dwight Higgs and wife Eileen of Pompano Beach; three nephews, Cecil Fred Higgs, III, Phd, Cedric D. Higgs, and Timothy Higgs, and four nieces, Nicole Higgs, M.D, Eleanor Higgs Wilson, Mahrtina Higgs, and Liahna Higgs. Numerous cousins and devoted friends also mourn her loss. “. . . But the gift of God is Eternal life in Christ Jesus our Lord.” (Romans 6:23)

On April 29, 2022, Joyce Thurstia Higgs, committed woman of God, retired educator of young minds and devoted sister, aunt and cousin, passed away at the age of 64. Joyce was born in Pompano Beach, Florida to a loving family. She was named... View Obituary & Service Information

The family of Joyce Thurstia Higgs created this Life Tributes page to make it easy to share your memories.

Send flowers to the Higgs family.