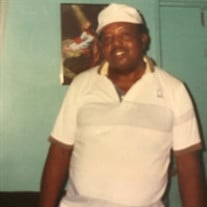 Obituary To every thing there is a season, and a time to every purpose under the heaven: Ecclesiastes 3:1 (KJV) ...a time to be born, Jimmy "Jim" Valentine Thompkins age 80, was born to Mr. Goins Thompkins and Mrs. Louise Kellam Jones on February 14th, 1938, both of whom preceded him in death. ...and a time to die; th Jimmy, returned to his heavenly home on July 13 , 2018, after a valiant battle with a long illness. His devotion to his family and his belief in God was the strength that supported him in his struggle and ultimately gave him peace. ...a time to plant, Jimmy received his early education in, Dublin, GA. Jimmy left Dublin, GA as a teenager and later he moved to Pompano Beach, Florida, where he immersed himself into the community as a construction worker and pool laborer, later he became the proud owner of Thompkins Lawn Service. As a businessman this would be his lifelong passion for over 72 years. He was always, dedicated compassionate and concerned about his staff and work crew. During his illness and elderly age, his son was an acolyte for his father until his demise. During their quality time his son taught and encouraged Jimmy in the word of God and eventually led him to Christ. Even through family challenges Jimmy still believed in family unity and strong family values. He served faithfully at Bennett Temple Church of the Lord Jesus under the auspices of the late Bishop George Bennett. Jimmy was blessed with a large and loving family. He met and married his best friend, Harriett Thompkins in Pompano Beach, FL, to this union Jimmy and Harriett raised their children with patience, discipline and humility. He taught his children to be respectably and dependable adults. From the very beginning he loved God and Family. Jimmy was a man that spoke directly from his heart. He was kind yet direct and a very straight forward man, he always had time to answer a question or solve a problem, no matter how small or big, he was a friend to all. Jimmy's character and temperament can best be shown from the time he was diagnosed until his passing into heaven. Jimmy had every right to cry, be mad, or even fall into depression after his diagnosis, but, instead he loved and lived every moment that he was given, neither hard times nor illness would rob him of who he was. Jimmy was always grateful, until God called him home. He is dearly missed by his loved ones, who celebrate the fact that he is at peace with his creator. Jimmy leaves to cherish his memories, two sons: Bishop Quenton Thompkins and Jimmy Thompkins Jr, both of Pompano Beach, FL; one daughter in law: Mary; one sister: Juanita Raysor; one sister in law: Rachel Thompkins; one brother in law: B. King; step sons and daughters; a special friend: Geneva McWhorter; four grandchildren: Quentelle Thompkins Perpall; two great grandchildren: Christopher Perpall and Camaryn Perpall; Special Nieces and Nephews: Delton Thompkins; Craig Thompkins and Cynthia King; several love ones who has preceded him in death; his parents; Goins and Louise Thompkins; two siblings; Irene King and Jethero Thompkins; a host of aunts; uncles; nieces; nephews and a host of other relatives and friends. ...and a time to pluck up that which is planted; Wherefore I perceive that there is nothing better, than that a man should rejoice in his own works; for that is his portion: for who shall bring him to see what shall be after him?

Obituary To every thing there is a season, and a time to every purpose under the heaven: Ecclesiastes 3:1 (KJV) ...a time to be born, Jimmy "Jim" Valentine Thompkins age 80, was born to Mr. Goins... View Obituary & Service Information

The family of Jimmy Thompkins created this Life Tributes page to make it easy to share your memories.

Obituary
To every thing there is a season, and a time to every...

Send flowers to the Thompkins family.