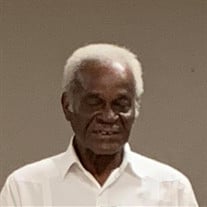 Jimmy Lee Lamar, Sr. Sunrise: January 10, 1945 – Sunset: March 29, 2020 Born James (Jimmy) Lee Lamar, Sr. in Moultrie, Georgia on January 10, 1945 as the third of nine children to the late Johnny Lamar, Sr. and Flossie Bryant Lamar (Betty Lamar Larkins, Johnny Lamar, Jr., Barbara Lamar Taylor, Eddie Lamar, Benny Lamar, Catherine Lamar Skinner, Robert Lamar, Sr., and Viola Lamar Johnson). His legacy precedes him with four children: Jami Lamar (Kevin), Bethany Lamar, James Lee Lamar, Jr., and Cheryl Lamar and three grandchildren: Kyra Lamar, Jaylen Lamar, and Kase Emanuel [Wife and Mother of his children: Shirley Bailey Lamar]. Jimmy was a long time resident of Sanders Park, in Pompano Beach, Florida. He is a graduate of Blanche Ely High School, class of 1964. He was granted a football scholarship to Albany State College, where he graduated in 1968, with a Bachelor’s degree in English. During his time at Albany State College, he joined the Omega Psi Phi Fraternity, Inc. Chi Epsilon Chapter, where all of his brothers followed in his footsteps and were later featured in a Jet Magazine article, stating the legacy of five brothers attending the same college and pledged to the same fraternity. Jimmy later became a founding member of the Eta Nu Graduate Chapter of Omega Psi Phi Fraternity, Inc., founded on June 11, 1969 in Pompano Beach, Florida where he was one of the First Officers as the Dean of Pledges. Jimmy started his career as an English teacher at his Alma Mater, Blanche Ely High School, then moved on to Rickards Middle School and later ended his career at Pompano Beach Middle School, where he taught for over 38 years as an educator. As much as he loved education, he was also a dedicated little league football coach, with the Deerfield Beach Packer Rattlers, where he coached for over 20 years. Life as an adult, he became a member of Abundant Life Christian Center in Margate, Florida and was an active member in his community, and with his graduating class of 1964 (Tiger Pride). As he left us to go home with some memories, he loved his road trips to homecoming weekends, sitting around the house with his brother, and eating home-cooked meals with his family while watching football. Though his plans were to create more memories with his family and friends, he could not stay long, because God called him home. He will forever be in our hearts and we will miss him dearly. Until we see him again, let us honor his legacy by continuing to love, and be a blessing to others.

The family of Jimmy Lee Lamar Sr. created this Life Tributes page to make it easy to share your memories.

Send flowers to the Lamar family.