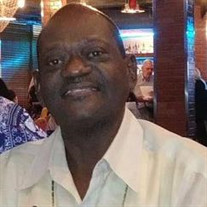 Mr. Jeffrey Zernal Smith was born September 28, 1963, along with his twin sister, Stephna Zernelle Smith to the proud parents of Bobby Glenn and Marilyn Smith (who preceded him in death) at Providence Hospital in Fort Lauderdale, FL. Jeffrey... View Obituary & Service Information

The family of Jeffrey Smith created this Life Tributes page to make it easy to share your memories.

Send flowers to the Smith family.