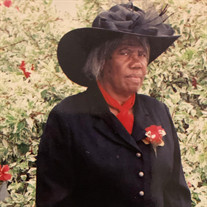 SŒUR JEANNETTE DEJOIE 2 février 1938 - 3 janvier 2020 Sunday, January 19, 2020 10:00 A.M. Bethléhem SDA Church 406 Northwest 3rd Avenue Pompano Beach, Florida 33060 BIRTH AND FAMILY Sister Jeannette DeJoie was born on February 4, 1938 in Sainte Suzanne, near CapeHaitian in the northern part of Haiti. Her parents Saint-Marc and Elisana DeJoie had 13 children, Jeannette being number six. Ten of her siblings preceded her in death. The surviving two are Soma DeJoie and Heureuse Davilmar. EDUCATION For her formal education she attended the “Ecole des Mères” in her home town. Later on, she went to professional school to become a seamstress. Searching for a better future she turned sails towards the Bahamas where she worked for about 14, 15 years before migrating to the United States around 1986-87. She settled in the State of Florida with her two daughters, Natacha and Nadia. She worked at a Nursing Home in Fort Lauderdale until her early retirement. RELIGIOUS AFFILIATIONS Sister Jeannette was a very religious individual. She began as a catholic, then… then… and then. Finally, she discovered the truth about the Holy Sabbath of the Lord and she got stuck in the Seventh-day Adventist Church for life. She had a heart for mission. Sharing her faith in Jesus was her passion. She would not wait for the church to provide tracks and booklets to give out. She had her own budget, bought her mission supply and she shared everywhere: in the street, on the bus, at the doctor’s office…. Faithful to her God, she was present at every church service: Saturday? Not negotiable., Friday night, Wednesday night, Tuesday morning for fasting and prayer service. The church will surely miss her greatly. PERSONALITY AND HOBBIES Jeannette was a warm, loving individual. She was a giving soul. A defender of others, a voice for the voiceless, the defender of the oppressed, that what she was. She had candy for the children, money also. If someone was in need of help, she would be the first one to answer. She loved to travel and spend time with her family. RETIREMENT AND DEATH Sister Jeannette was in pretty good health except for occasional back pain. Unfortunately, these brood of people don’t las long. We always feel that they leave us too soon. But God has a purpose and a plan for each one of us. One day we will know why she departed so to speak without saying ‘goodbye’. She was at the New Year’s Eve service at the church on Tuesday, as well as the Wednesday night’s service on New Year’s Day. On Friday, January 3, she was seen around the neighborhood by five o’clock pm. Late the same evening she was gone. She left behind to mourn, Two daughters: Natacha DeJoie, Nadia DeJoie Stubbs and husband James Michael Stubbs III; One grandchild: Marica; Two surviving sisters: Soma DeJoie, Heureuse Davilmar 36 nephews and nieces including one very close to her: Arold Davilmar and his wife Saramise Davilmar. And a host of relatives, friend and church members.

The family of Jeannette Dejoie created this Life Tributes page to make it easy to share your memories.

Send flowers to the Dejoie family.