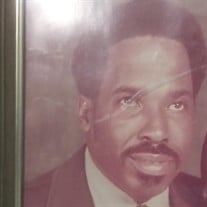 On August 28, 1937, in the city of Pompano Beach, Florida, the late James Preston Grant, Sr. and Albertha Williams were blessed with their only child, a son, and they would name him James Preston Grant, Jr.. James, Jr. received his education within the Broward County School System. He attended and was a proud graduate of Blanche Ely High School Class (B.E.H.S.) of 1957. He loved Music and enjoyed the outdoors. His love for Music led him to being a member of the B.E.H.S. Jazz Band as a Saxophonist. After Graduating High School James would continue to follow his passion for Music and that Orange and Green by enrolling and attending Florida Agricultural and Mechanical University (F.A.M.U.) and would become an Outstanding Saxophonist in the F.A.M.U. Jazz Band and graduated in 1961 with a Major in Business Administration a Minor in Law. After graduating from F.A.M.U. Mr. Grant would return to his home to give back to his community by becoming a Police Officer and was employed by B.S.O. Police Department, where he was Blessed to serve and protect his very own City, Pompano Beach, Florida where he worked for 13, and then he would continue his tenure within the city by working in the Department of Grounds Maintenance for 12 years and then he would retire. Now this gave him more time to watch and follow his favorite Sport and team, the New England Patriots Football Team. He was Honored and Thankful to have given 25 years of Service back to his community. Mr. Grant later would Meet and marry Bessie Mae Grant whom preceded him in death in 2017. On June 14, 2021 after a short illness, at John Knox Village – Hospice Unit, James would transition from his Earthly home to his Eternal resting place. For I have left it all behind as I dress in the wardrobe God has picked out for me, so Farewell to my family: Sons: Anthony R. Grant(deceased), Harry Berrian(Marcia), Willie Berrian(Sharon), Samuel L. Grant, Sr., Rawn Berrian, Dickie Berrian, Freddie Berrian(Linda), Chris Berrian, John Hayward Grant, Earl Hawkins; Daughters: Deborah Grant Robinson, Mae Frances Gordon, Denise Lovett, Velma Grant Flowers, Taiwana Hawkins- Johnson(deceased), Linda Reid Grandchildren: Thomas Hicks, Jr. Steve, Sr., Keith, Jr., Kalvin, Sr., Valarie Flowers, Demetrius Hays, Steve, Jr., Stepheon, Stephen(Duke) Flowers, Colandra Wilson, Shayla Grant, Samisha Askew, Samuel Grant, Jr. Brandon & Brandi Johnson, Vera Goodrum, Shirlena Goodrum, Eddie, Warrenia Robinson, Malika & Marcia; 36 Great-Grandchildren, 21 Great-Great-Grandchildren; 1 Aunt Lillie Williams of Dania, Fl and numerous other family, friends, co-workers and others whom will also miss my presence.

On August 28, 1937, in the city of Pompano Beach, Florida, the late James Preston Grant, Sr. and Albertha Williams were blessed with their only child, a son, and they would name him James Preston Grant, Jr.. James, Jr. received his education... View Obituary & Service Information

The family of James Preston Grant, Jr. created this Life Tributes page to make it easy to share your memories.

Send flowers to the Grant, family.