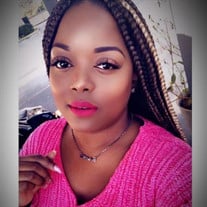 The Glamorous Life Jalisa Michelle Moreland was born two months early on February 2, 1989 to John L. and Marshelle Moreland. She quickly sparked into our hearts and lives. She matriculated through the Broward County School system... View Obituary & Service Information

The family of Jalisa Michelle Moreland created this Life Tributes page to make it easy to share your memories.

Send flowers to the Moreland family.