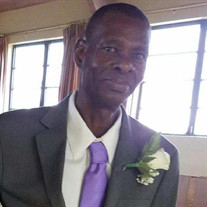 Hubert Dort died peacefully on January 23rd in Margate, Florida at the age of 66. Hubert is survived by his wife of 43 years, Adeline Dort (née Izophe); children, Alberte Edrington (Brian - Philadelphia), Dignia Robinson (Thomas - Florida), Adrien Dort (Loudeny - Florida); and siblings, Fitzler Dort, Raynaud Dort (Brothers); Rosemarie Dort (Sister). He is preceded in death by his parents, Dorcius Dort (Father) and Asephie Eliasin (Mother). Hubert was born on May 06, 1954 in Grande Saline, Haïti to his parent Dorcius Dort and Asephie Eliasin. He attended High School in Gonaïves. He married Adeline, his high school sweetheart in 1977. After moving to Marigot, St. Martin he began working as a mechanic and pursued his love for the trade until his last breath. During this time, two years after being married, the couple started expanding their family and welcomed 3 children into the world. His children remember him as a kind, gentle, devoted father and grandfather with an unmeasurable love for all 6 of his grandchildren (Thomas, 13 years old; Nayah, 12 years old; Xavier, 10 years old; Tyler, 3 years old; Alayah, 2 years old, and Luana, 1 month old). Hubert was a generous, witty, dedicated and hardworking individual who loved his super-size family and was passionate about, what he believed to be the only undisputed NBA team, the Miami Heat. He is also a proud fan of the France Team, who are currently reigning as World Cup Champions. Additionally, Hubert leaves to cherish his memory a host of nephews, nieces, cousins and friends.

The family of Hubert D. Dort created this Life Tributes page to make it easy to share your memories.

Send flowers to the Dort family.