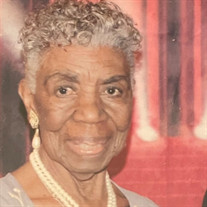 We speak her name......Hazel Dell Kelley Armbrister, We speak her name A giant lifeline has been severed and many will be affected by this disconnect. This prominent lifeline, securely wrapped up in a petite female package has been dis- connected... View Obituary & Service Information

The family of Hazel Armbrister created this Life Tributes page to make it easy to share your memories.

We speak her name......Hazel Dell Kelley Armbrister, We speak...

Send flowers to the Armbrister family.