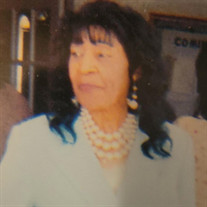 Hattie Hogan’s Journey Hattie Mae was born in Leflore County, Mississippi on May 31, 1934, the daughter of Alice Martin Jones and Wiley Jones. Hattie was the mother of five children. She grew up in Mississippi and later relocated to Joliet, Illinois around 1955 with her cousin Frankie Doss. After coming to Joliet, she met and married Montez (Jack) Hogan who has preceded her in death. After their divorce, she moved to Deerfield Beach, Florida in 1981 to be near her sister. Hattie worked in a uniform shop in Joliet, where she was well known for her remarkable sewing skills. After moving to Deerfield Beach, she started working in an interior decorating shop. Her sewing skills became so well known that she eventually opened her own interior decorating shop called “Pillow Heaven.” As a seamstress/interior decorator, she did it all, from women clothing, men suits, pillows, comforters, draperies and even upholstery. After purchasing her home in Pompano Beach, Florida, she had the “Pillow Heaven Shop” built onto her home and continued her multiple talents from there. Hattie was also known for her excellent cooking skills and many food dishes were requested of her, even from her children and family. She was also known as a “fashionista;” she coordinated several fashion shows and even participated in them, modeling many of her own designs. In her younger days, when married to Montez, she belonged to a Motorcycle Club and was on a Bowling League. Hattie was a member of the Deerfield Beach Church of Christ, participated in several ministry programs and loved and communicated with all the church members, no matter what age. She continued to give of herself to God, her family, and her church until her death. On Wednesday, January 27, 2022, Hattie passed away suddenly. She was proceeded in death by her mother, Alice Jones; her brothers: James and Orbie Jones and her sisters: Eula Mae Smith and Betsy Ruth Harris. Hattie will be mourned by her last sibling Monroe Jones, her children: Alice Jones Lee, Shirley Walls Payton, Marvin Hogan, Jerry Hogan and Vincent (Mellenna) Hogan; her step-daughter: Marlene Hite; her grandchildren: Corey (Betty) Jones, Marcus (Bianca) Lee, Rodney Walls, Angie Walls, Anthony Payton, Candice Payton, Cutric, Mekhi, Vincent Hogan, Jr., LaKeisha Martin, Stetson President; her great-grandchildren: Cory (PeeWee), Corey Jr. (Debbie), Torrell, Messiah, Mason, Bella, Justin, Autumn, LaMond, Amina, Anthony Jr., Adamari, Terrez, Xzaviar, Xzavion, Montavion, Camani, Ta’Niya, Carter, Cartier; her great-great grandchildren: Lyric and Jada; and many nieces, nephews, cousins, church family and friends. ​

Hattie Hogan&#8217;s Journey Hattie Mae was born in Leflore County, Mississippi on May 31, 1934, the daughter of Alice Martin Jones and Wiley Jones. Hattie was the mother of five children. She grew up in Mississippi and later relocated... View Obituary & Service Information

The family of Hattie Hogan created this Life Tributes page to make it easy to share your memories.

Send flowers to the Hogan family.