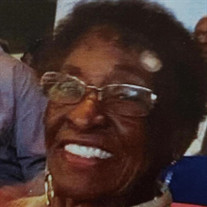 o God Be the Glory were the sentiments of the joyful parents: Mr. Altony Lee and his wife, Eva Kendricks Lee on June 25, 1940 in Ashburn, Georgia. They chose to name this beautiful child, Gloria Jean Lee. Gloria was the third of ten children born to this union. While Gloria was a young teen, the family relocated to South Florida. Residing initially in Oakland Park and then moving to Pompano Beach, Gloria received her formal education from the Broward Schools District, attending the Legendary Blanche Ely High, under the leadership of Mrs. Blanche General Ely. Displaying the characteristics of a graceful woman, Gloria was affectionately called Glory. In her young adult years, she caught the eye of a tall, handsome prince; Thomas Gosier, who later became her husband. The two were joined in Holy Matrimony on October 17, 1958. The couple enjoyed 62 years of marital bliss. To this union, six children were born; Gonzales, LaRhonda, Patricia, Thomas, Shelbi, and Therrell. Gloria enjoyed shopping, spending time with her sisters, and cruising around town in her mint-green Mercedes Benz. However, her all time favorite pastime was enjoying the great outdoors. She enjoyed camping and fishing with her spouse, neighbors, and close friends. Though small in statue, Gloria possessed a huge, kind and caring heart. Ms. Glory welcomed daily visits from her nieces, nephews, and friends of her children into her home. She was surely a Community Mom. On Saturday, October 31, 2020, family and friends gathered to shower Gloria as we Gave Her Roses While She Yet Lived. On October 5, 2020 Gloria her Gloria was preceded in death by her parents, a brother Roosevelt Lee, a sister ~ Emma Giles, a daughter ~ LaRhonda Jackson, and a son ~ Gonzales Gosier. Mrs. Gloria Gosier is survived by her husband ~ Thomas Gosier, Sr.; Daughters ~ Patricia Gamble (Frank), Shelbi Gosier; Sons~Thomas Gosier (Joan), Therrell Gosier (Juarlonda); Siblings~Mary Giles, Bobby Lee, Ozzie Swain (Willie), Altony Lee (Althea), Dorothy Lee, Joann Jordan (Kennely), Gary Lee; Numerous Grandchildren, 24 Nieces & Nephews, A host of other heartbroken family members, close friends of the family and loving neighbors whose hearts will forever sing To God Be the Glory!

o God Be the Glory were the sentiments of the joyful parents: Mr. Altony Lee and his wife, Eva Kendricks Lee on June 25, 1940 in Ashburn, Georgia. They chose to name this beautiful child, Gloria Jean Lee. Gloria was the third of ten children... View Obituary & Service Information

The family of Gloria Jean Gosier created this Life Tributes page to make it easy to share your memories.

o God Be the Glory were the
sentiments of the joyful parents:...

Send flowers to the Gosier family.