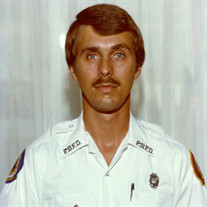 George Minnich was welcomed into this world on October 13, 1954. Born in York, Pennsylvania, George’s love of York Peppermint Patties started early. After moving with his family to South Florida, George began his lifelong passion of being a paramedic and firefighter at age 16 when he volunteered as a Junior Fireman. This early volunteer work turned into a career that saw him rise through the Pompano Beach Fire Department ranks to become a Division Chief. After 30 years, he retired with a wonderful send off. While George loved his job--his family, his friends and his hobbies were his greatest passions. George had a passion and zest for life. Golf was a lifelong love and his enthusiasm for golf was contagious. He sought to pass this onto the next generation through volunteering as a golf coach at First Tee and Pope John Paul High School. George consistently gave to others and lived a life of service. He was very civic minded and was a proud community leader and a pillar of the Pompano Beach Chamber of Commerce. George was an exceptional cook, a skill he learned over the decades to become a master chef. George loved fine wine and was a regular visitor along with Barbara and her son Ken to Napa Valley. George had a love of learning that was illustrated by his joys of traveling with Barbara—whether to Russia, China or the best national parks. Wherever he went, his smile and positive attitude accompanied him. George’s two greatest loves were his daughter Marissa and his wife Barbara. Marissa is married to Bryan and George loved Bryan as a son. George would proudly talk about Marissa to everyone around him and he felt she was his greatest accomplishment and legacy. George’s true lifelong love was his wife Barbara. After meeting at a firemen retirement party, George asked Barbara out and the rest is history. Over 31 years of blissful marriage resulted in thousands of priceless experiences and memories. Barbara always called meeting George the best fringe benefit of her job. With Barbara’s encouragement, George enrolled and graduated from Florida Atlantic University with Honors. George was amazingly close to his family. He loved and frequently visited his mother Loyetta, his brother Steven, his sisters Sue (married to Steve) and Kathi. George was predeceased in death by his brother Mike. He was honored to be an amazing uncle to Mikey, Matthew, Brittany, Jen, Tyler, Tiffany, Jordan, Bruce, and Zaya. Barbara’s father Howard, her son Ken, and Ken’s children Graham, Gensen, Gatsby and Grey loved and were loved by George. While sorely missed by the multitude of those who love George, we will all get solace picturing him happily golfing in heaven. Though he is gone, he will live on forever in our hearts and minds and for all of those who were fortunate enough to know and love him.

George Minnich was welcomed into this world on October 13, 1954. Born in York, Pennsylvania, George&#8217;s love of York Peppermint Patties started early. After moving with his family to South Florida, George began his lifelong passion of... View Obituary & Service Information

Send flowers to the Minnich family.