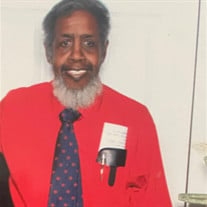 AUGUST 2, 1947SUNSET MAY 12, 2021 SATURDAY MAY 22, 2021 AT 1:00 PM Elder Gaston Byes McDougle, Jr. was born on August 2, 1947 in Pompano Beach, Florida. Gaston was the 4th son of the fourteen children born to the union of the late Elder Gaston Byes McDougle, Sr and the late Lillian Wilson McDougle. Two brothers George and Anthony McDougle and one sister Sharon McDougle Moore preceded him in death. Gaston, widely known as “Cootaboy” attended Elementary School at Pompano Project Schools under the Facilitation of Mrs. Golden. He later transferred to Blanche Ely and continued his education and graduated with his High School Diploma in 1966. After his graduation he earned a living with multiple facets of employment a Landscaper, Handman and Butcher at Georgia Groceries. On October 23, 1967 he was drafted by the military, where he fought and proudly served in the United States Army for two (2) years. Gaston McDougle, Jr. was honorably discharged from the military on October 23, 2969. On August 30, 1970 he married the love of his life Lorraine Johnson (McDougle). This holy matrimony lasted for over 50 years and five children born to his union; his eldest son Gaston Byes McDougle, III preceded him in death. Lecresha McDougle Permenter, Delvin and Tory McDougle and Priscilla McDougle Mabra. Yea though I walk through the valley of the show of death, I will fear no evil, for thou are with me; thy rod staff they comfort me. In 1984 Gaston continued on the battlefield, this time on the Lord’s side, and with a new enemy, the Angels rejoiced as gave his life to Christ. He served under the leadership of Pastor Arnold McRay and held his membership at the House of the Lord Christian Center. He then received Baptism in the name of The Lord Jesis and as the Spirit gave him utterance and he was ordained as an Elder in 1986. Elder McDougle slayed the devil and brought forth the word everywhere he went, and one of his favorite passages was Matthew 7:13-14 Enter ye in at the straight gate: For wide is the gate and broad is the road that leads to destruction, and many there be which go in thereat: Because straight is the gate, and narrow is the way, which leadeth unto life, and few there be that find it. He often mentioned that you have two choices heaven or hell and “You won’t miss them both!” Hebrews 9:27 Man is appointed once to die … Christ was sacrificed once to take away the sins of many; he will appear a second time, not to bear sin, but to bring salvation to those who are waiting for him. Elder Gaston McDougle, Jr. was a free-spirited joyful person and passed away as he lived peacefully on May 12, 2021. He walked in fear and admonition of the Lord; he was private and protective of his family. His eight grandchildren held a special place in his heart and his face lite up with the mere mention of their names. Although he was not the first-born son, he was the bearer of his father’s name and the mirror image physically and attributes. He always encouraged others and was a jokester at times. He always offered a lending hand and never sought out reciprocities. He always provided an interesting conversation beginning with Praise him and ended with a biblical passage. Also, more scriptures in between, he never hid the fact that he loved the Lord! He often broke out in song, What More Can He Do? and By and by When the Morning Comes (when all the saints of God gather home). Gaston was in inspiration to all and maintained a smile through his difficulties. He fought the good fight and finished his calling. He was enjoyed by family and friends and will be truly missed. Job 14:14-15 If someone dies, will they live again? All the days of my hard service I will wait for my renewal to come. You will call and I will answer: On May 12, 2021, the Lord answered the call of Elder Gaston Byes McDougle, Jr. and he transitioned into his new home and now resides on the corner of Hallelujah Highway and Glory Road where the streets are paved with gold. He leaves to mourn his wife of over 50 years Lorraine Johnson McDougle; four children; Lecresha (Marlason) Permenter, Delvin McDougle Tory (Carla) McDougle, and Priscilla (William) Mabra. Seven grandchildren Marlason, Joshua and Imoni Permenter, Tory Jr., Troy and Ceriyah McDougle, Paityn Mabra and one great-grandchild Leila Permenter. Ten siblings Henry and Jerome McDougle, Charline (Richard) Scott, William (Melissa) McDougle, Vivian Adams, Peggy (Michael) Carter, Valerie (Tommy) Hunter, Donald (Elaine) McDougle, Ruthie (Alfred) Jones and Yolanda (Rudolph) Arthur to cherish and cover on his memories. A special friend, Pastor Downey a host of nieces, nephews, aunts, uncles, cousins and friends to reverence in his memories.

The family of Elder Gaston Byes McDougle, Jr. created this Life Tributes page to make it easy to share your memories.

Send flowers to the McDougle, family.