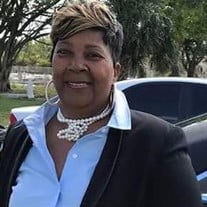 The life of Mrs. Gail Irving Wells came into full bloom on June 21, 1957 in Fort Lauderdale, FL. She was born to the parentage of Clifford Henry & Queen Elizabeth Irving. Gail blossomed into a beau- tiful, chubby, dimple faced child, while residing in the city of Pompano Beach. She cherished the love and nurturing of her grandparents; Charlie and Queen Davis, whom she truly loved. Gail received her formal education from the Broward County Schools District, attending Charles R. Drew Elementary, Margate Middle, Blanche Ely, and eventually Coconut Creek High School. She was a proud member of the class of 1975. At a young age, Gail became a blushing bride and was blessed with Her Four Heartbeats; Desie, Leon, Tony, and Alicia. This union would later bless her with numerous grandchildren, whom she adored. Gail enjoyed beautifying her lovely home, which was gracefully constructed by her beloved sons. She enjoyed decorating , traveling, and mechanically testing her luck, but her greatest joy was unit- ing together with her family and close friends. On August 27, 2005, with the rising of the sun, Gail was joined in Holy Matrimony with Mr. Gerald Wells in a 5 a.m. Beach-Side Ceremony. The two savored many years marital bliss. Together, the two were faithful members of Visions for Christ Ministries, where they worshiped under the leader- ship of Pastor Donald Robinson. After the passing of her mother, Queen Elizabeth, though she was not the eldest of Queen’s Angels, Gail quickly assumed the leadership role as the head of her siblings. She became their mother, advisor, protector, guardian, and travel agent. During the early morning of September 26, as the sun was preparing to rise, Gail surrendered to the will of God Almighty. She laid down her sword which she had used to fight a long battle with cancer. Mrs. Gail Irving Wells, took her savior’s hand and allowed him to lead her on to the promised land. Gail was preceded in death by her parents, her grandparents, and a sister: Rosalyn Smith. She is survived by her loving and supportive husband of fourteen years: Gerald Wells; Daughter: Alicia Frazier; Sons: Desie Frazier, Leon Frazier, Latonian (Tony) Frazier; Step-daughter: Danielle Wells; Siblings: Christa Scippio, Jerome Irving (Shawanna), Marilyn I. Williams, Michelle I. Smith (Bernard), Dawn R. Jones (Lamont), Linda Ross; 17 Grandchildren, 10 Great Grandchildren, Godchildren: Tiffany D. Smith, Trayvis McCall, LaTerria Smith, Jason Gibbons; Aunts: Gloria I. Jackson, Leola Irving; Special Friends: Rosalyn Lawson (Leroy), Nedra Johnson (Lee), a host of cousins, friends, & church family.

The family of Gail Wells created this Life Tributes page to make it easy to share your memories.

The life of Mrs. Gail Irving Wells came into full bloom on June...

Send flowers to the Wells family.