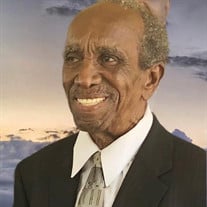 God saw you getting tired, When a cure was not to be He wrapped his arms around you, and whispered, “COME TO ME” He gave you needed rest, GOD”S GARDEN must be BEAUTIFUL HE only takes THE BEST. Mr. Freddie Joliet Edwards, son of the late Jordan O. Edwards Sr., and Flora Harrington Edwards was born November 22, 1935 in Deerfield Beach, Florida. He attended school in Broward County and was a graduate of Blanche Ely High School in Pompano Beach, Florida. At an early age he professed his faith in God and joined First Zion Missionary Baptist Church where he was a dedicated member. Freddie Edwards was a member of the United States Army and received an Honorable Discharge in 1964. Mr. Edwards was also a member of the Masons. He was united in holy matrimony to Alene Harris in June of 1961. The couple resided in Jacksonville, Florida and Phenix City, Alabama for several years before returning to South Florida. Mr. and Mrs. Edwards lived in Lauderhill, Florida since 1974. Mr. Edwards worked as a Supervisor for Winn Dixie for 25 years. He worked hard to provide for his family. His life was well-lived, and his influence will forever remain in the lives of all who knew him. He quietly departed this life Monday, June 7, 2021 at Florida Medical Center in Lauderdale Lakes, Florida. Preceding him in death were his father, Jordan O. Edwards Sr., his mother, Flora Harrington Edwards, and his brother, Jordan (Annie Grace) Edwards Jr. The glow of his presence will forever be cherished in the lives of his children: Kimberly Shelton of Pembroke Pines, Florida, Darren (Ann Marie) Edwards of Davie, Florida, Freddie Edwards Jr., of Jacksonville, Florida, Terrence (Katrina) Edwards of Jacksonville, Florida, Rojuana Moss of Boca Raton, Florida; twelve grandchildren, fifteen great grand- children; brothers, Joseph (Pauline) Edwards Sr., of Deerfield Beach, Florida and Carl (Barbara) Edwards of Boynton Beach, Florida; sister, Marie Fann of Fort Lauderdale, Florida and a host of devoted nieces, nephews, cousins and friends.

God saw you getting tired, When a cure was not to be He wrapped his arms around you, and whispered, &#8220;COME TO ME&#8221; He gave you needed rest, GOD&#8221;S GARDEN must be BEAUTIFUL HE only takes THE BEST. Mr. Freddie Joliet Edwards, son... View Obituary & Service Information

The family of Freddie Edwards created this Life Tributes page to make it easy to share your memories.

God saw you getting tired, When a cure was not to be
He wrapped...

Send flowers to the Edwards family.