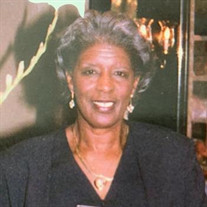 The Life & Times of Frances L. Judson God called Frances Leora Judson into being on June 22, 1937 in Pompano Beach, Florida. She was born to the parentage of Robert W., Sr. and Emily Durham Judson. Frances was the first female grandchild and the first child in her family. Her parents moved from Pompano Beach to Miami, Florida when she was a toddler and while in Miami, 5 other children were added to their household. Frances’ formative years were started in the public schools of Miami/ Dade County, but her family returned to Pompano Beach when she was about 10 years old. After moving back to Pompano, the family attended Mount Calvary Baptist Church under the leadership of Rev. Collie Pete. During a revival service Frances gave her life to the LORD and was baptized. Because of our mom’s prodding we all became active in the youth ministry at Mount Calvary, by this time Frances had begun to take music lessons. As her music lessons progressed, she started to play for the Sunday School. She and all of the other siblings attended Coleman Elementary school and subsequently finished high school at Blanche Ely High School, each graduating with honors. Frances graduated in 3rd place with the class of 1955 and from there continued her education at Florida Agricultural & Mechanical University in Tallahassee, Florida receiving a Bachelor of Arts Degree in Music in 1959. She later would receive a Master of Arts Degree from the University of Wisconsin, in Madison, Wisconsin. She also did some course work at Fairfield University in Connecticut. While at FAMU she was a member of the renowned FAMU Choir under the capable leadership of the late Dr. Rebecca Steele. She also pledged Delta Sigma Theta Sorority. She became a lifetime member of this sorority. She was also a lifetime member of Phi Delta Kappa. After college she returned home and became the Youth choir director in her home church of Mount Calvary. She taught elementary school music for several years at Sanders Park Elementary School until she got married and moved to Fort Lauderdale. While in Fort Lauderdale she taught elementary school music. Frances later found that she could no longer stay in Ft. Lauderdale and moved to Bridgeport, Conn., where she lived and worked in the schools of the City of Bridgeport for over 40 years. Frances joined the First Baptist Church of Stratford, Connecticut and immediately affiliated herself with the music ministry. By the time that she relocated back to Florida in 2014, Fran had become the director of the senior choir of First Baptist and was an integral part of the music ministry of First Baptist. Upon making the decisions to (come back home) from Connecticut, she rejoined Mount Calvary again. Her family, friends and sorority sisters will sorely miss Frances because she made her presence felt in whatever the endeavor. She leaves to cherish her life, 2 sisters, Gloria Lovell (Rudolph) of Orlando, Florida and Betty Judson, of Kissimmee, Florida. Two brothers, Richard Judson of Boca Raton, Florida & Kerry Judson (Emelia) of Pompano Beach, Florida. 13 nieces, Carlynn, Carol (Lynwood) Kathy, Melanie, Lauren, Robbin, Tresha, Carmen & Emily. 3 nephews: Ronald, II, (Janay), Shawn & Daran, 19 Grandneices & Nephews and a plethora of cousins.

The Life & Times of Frances L. Judson God called Frances Leora Judson into being on June 22, 1937 in Pompano Beach, Florida. She was born to the parentage of Robert W., Sr. and Emily Durham Judson. Frances was the first female grandchild and... View Obituary & Service Information

The family of Frances Leora Judson created this Life Tributes page to make it easy to share your memories.

Send flowers to the Judson family.