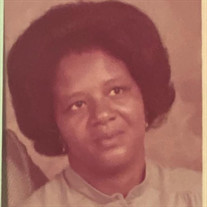 Ella Ree Jordan Strowbridge’s Life Journey On March 9, 1936, in the town of Plains, Georgia, the late Whitty and Rosa Jordan were blessed in their union with 10 children, one of their daughters would be named of Ella Ree Jordan. She was preceded in death by 7 of her siblings, Marcellous Jordan, Sr., Rosa Mae Times, Gladys Woods, Jethro Jordan, Alton Jordan, Lillian McNabb and Whitty Jordan, Jr. In 1938 The Jordans decided they would relocate from Georgia to Florida and make Deerfield Beach, Florida their home. Ella Ree Jordan met Roosevelt Strowbridge, Sr., a God-fearing man and on April 3, 1953 they were joined in Holy Matrimony. To this union they were Blessed with 11 beautiful children, 1 daughter, Mary Ann Strowbridge preceded both parents in death. While still in their youthful years, under the leadership of the late Elder Steve King, they joined The Church of the Living God, Pillar and Ground of the Truth, Which He Purchased with His own Blood, Inc., Jewell Dominion and were lifetime members. After receiving salvation, the Strowbridge’s were very faithful and dutiful within the Church. Ella Ree served on the Deaconess and the Usher Board. They were not parents that would send their children to Church, but they took them along with them. Roosevelt and Ella Ree instilled in their children, the importance of being saved and having the Holy Spirit within them. She was also known for her Elegant Dressing. Yes, Ella Ree Strowbridge was a woman of Virtue, Style and much Class. Shortly after their marriage, she became a Domestic Engineer, then Ella Ree and her late husband would soon establish themselves as Entrepreneurs, the owners of R.J. Trucking, Inc., and would become one of the most successful young Black Business owners in the city of Deerfield Beach, Florida. This family owned and operated business was designed as such. Ella Ree was the Secretary and Manager of the Business, she was a very good Business Woman. She made sure their Company was always in order, she was known as the quiet Mastermind behind the scene and today their family business, R.J. Trucking, Inc. is still thriving as such. Ella Ree Strowbridge was a very quiet, humble woman, she had a very witty personality but with a great sense of humor. She was also a very clever woman but ruled with an iron hand. She was slow to speak but was very attentive. Ella Ree would always encourage her children to speak up and she would give them time to express themselves, she was great listener and was also a disciplinarian. Ella Ree Strowbridge was a giver and when she gave or did for someone, it was always done in secret. A Woman whom you never heard complain about anything but in everything she would give God thanks. As Ella Ree rests in the arms of our Heavenly father, she leaves to cherish her loving and everlasting memories her 10 Children, Roosevelt Strowbridge, Jr.(Merilyn), Juanita Mitchell(Cecil), Raymond Strowbridge(LaWanna), Clifford Strowbridge(Linda Thomas), Loretta Strowbridge, Val Griffin(Eric, Sr.), Alvin Strowbridge(Deborah), Sherida Wright(John), Dr. Amy Strowbridge and Julie Strowbridge; 33 Grandchildren (and 1 preceding her in death); 48 Great-grandchildren; 4 Great-greatgrandchildren (and 1 Great-greatgrandchild preceding her in death); 2 Sisters, Lois Shelton and Mattie McKeever; 5 In-laws, Lenora Neely, Mae Liza Jones, Willie Lee Strowbridge, Gwendolyn Strowbridge and Helen Williams, and a host of other cousins, family and friends whom will also truly miss her.

Ella Ree Jordan Strowbridge&#8217;s Life Journey On March 9, 1936, in the town of Plains, Georgia, the late Whitty and Rosa Jordan were blessed in their union with 10 children, one of their daughters would be named of Ella Ree Jordan. She was... View Obituary & Service Information

The family of Ella Ree Strowbridge created this Life Tributes page to make it easy to share your memories.

Send flowers to the Strowbridge family.