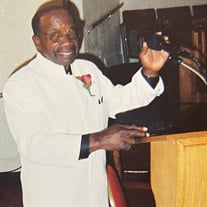 Life’s Journey of Reverend Edward Madison Edward Madison passed away on Thursday, July 22, 2021. He received his wings and said goodbye for now, the last days of his life was spent doing God’s work. Edward Madison was born on March 01, 1932 to the proud parents of Floyd Madison and Viola Bryant. The family put down roots in Deerfield Beach, Florida. Edward Madison was educated in the public school system. He made the decision after school to join the United States Army. During his tenure of Service to Our Country (June 25, 1950 - July 27, 1953) he served in the Korean War and received training in Engineering. After his years of service in the U.S. Army, Edward returned to his roots in Deerfield Beach, where he started his family and also began his own business in the field of Lawn Service and Maintenance. While maintaining his own Business, He was gainfully employed by the City of Boca Raton, and later transferred to the City of Deerfield Beach, where he retired after 30+ years of service. Edward Madison lived his life for the Lord, he was called to minister the Word of God over 40 years ago where he was still an Active and Lifelong Member, and Associate Minister under the leadership of Reverend Demetric R. Ford, he was also served as an Associate Pastor at New Beginnings MBC and Bibleway Temple Ministries both in Deerfield Beach, Fl, Reverend Madison Loved the Lord and continued to Preach God’s word until the end. He’s survived by: His Daughter, Shirl Madison of Fort Lauderdale, Fl; Son, Edward Madison, Jr., of Springfield, Ill.; A Son and daughter, Amos Madison and Carolyn Madison whom preceded him in death; Grand Children: Adriane Pitts Heller (Husband Drew), Chandra Pitts, Roger Pitts and Eric Madison; 9 Great Grands and 10 Great-great Grands A Brother-in-law, Lionel Wallace, Sr. of Vassar, Michigan; 13 Nieces; 12 Nephews; and a host of Cousins, Grand and Great-grand Nieces and Nephews; A Special Friend, Wanda Duncan; Step Children: Selena Williams, Sandra Haynes, Louise Haynes, Lois Mack, Tavares Haynes; 7 Step-Grand Children and many other loving friends and Church family whom will truly miss him.

Life&#8217;s Journey of Reverend Edward Madison Edward Madison passed away on Thursday, July 22, 2021. He received his wings and said goodbye for now, the last days of his life was spent doing God&#8217;s work. Edward Madison was born on March... View Obituary & Service Information

The family of Reverend Edward Madison created this Life Tributes page to make it easy to share your memories.

Send flowers to the Madison family.